‘The Young and the Restless’ Spoilers: Billy and Phyllis Caught By Blackmailer On Aldulterous Cheating Getaway? 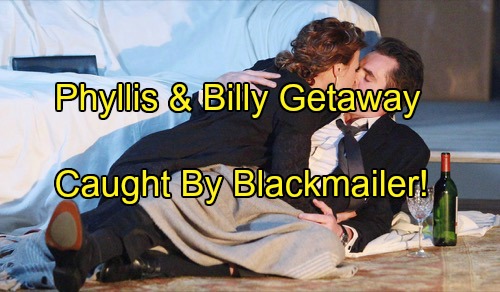 The Young and the Restless (Y&R) spoilers tease that Phyllis (Gina Tognoni) and Billy (Jason Thompson) will head off on their romantic getaway. Phyllis obviously feels guilty about lying and sneaking around, but she doesn’t feel guilty enough to stop. It was pretty low to make Jack (Peter Bergman) cancel their plans just so she could make new ones with Billy.

Nevertheless, Phyllis just can’t seem to get enough of the passion she has when she’s with Billy. Jack is sweet, but there’s something about Billy’s craving for Phyllis that draws her in. With that in mind, Billy and Phyllis will want to spend the weekend in their own little paradise. They’ll hope to avoid detection and distractions during their time alone.

Unfortunately, something is bound to go wrong. The Young and the Restless rarely lets excursions like this go off without a hitch. This trip is about to get derailed in a big way. Billy and Phyllis will be shocked when someone unexpected shows up during their weekend escape. This special guest will undoubtedly spoil their adulterous fun.

We don’t know the identity of this getaway crasher, but he or she is sure to shake things up. It’s possible that Jack could manage to track down where Phyllis is staying. He might want to surprise Phyllis since he thinks she’s stuck at a boring conference. However, we just watched Billy and Phyllis face a close call with Jack.

Y&R may not go this route since it would be kind of repetitive.

Victoria (Amelia Heinle) might be a possibility, but she’d probably have to find them thanks to a coincidence. Bethany (Chrishell Stause), on the other hand, could be a real contender. She’s really got the hots for Billy and we could see her move into stalker-ish territory at some point.

Of course, there’s a chance it could be someone like Luca (Miles Gaston Villanueva). He’s been telling Summer (Hunter King) that he thinks he can win Phyllis over. Perhaps Luca has secretly been keeping tabs on Phyllis just like Victoria.

His private investigator could easily find out where Phyllis is staying and who she’s with.

If Luca got updates on this affair, he could promise to remain silent if Phyllis did as she was told. She’d have no choice but to support Luca and Summer’s relationship. Then again, Y&R spoilers say Kevin (Greg Rikaart) will make some type of startling discovery on next week’s episodes.

It seems more likely that Kevin’s findings will relate to Sharon (Sharon Case), Victor (Eric Braeden) or Chloe (Elizabeth Hendrickson). Still, you never know! Speaking of Chloe, she’s also an option for the crasher since she’s apparently lurking in an undisclosed location.

Regardless of who interrupts, it could cause major problems for Billy and Phyllis. A blackmail scheme could be brewing depending on who sees too much. Which character will become privy to Phyllis and Billy’s secret? Time will tell, but we can’t wait to see what they’ll do with the news.

Stick with The Young and the Restless to watch the chaos unfold.

So Y&R fans, what do you think about Billy and Phyllis’ unexpected visitor? How will they try to keep this character quiet? Will he or she blab eventually? Voice your opinion in the comments below and don’t forget to check CDL often for the latest Young and the Restless spoilers, updates and news.