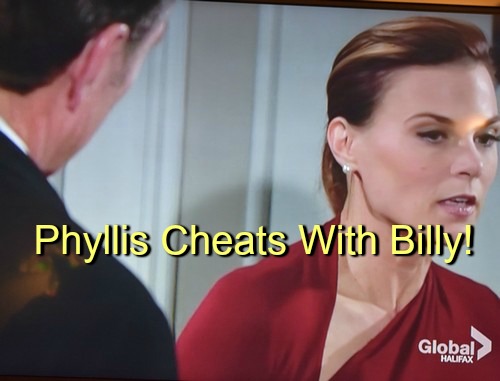 “The Young and The Restless” (Y&R) spoilers indicate that in coming epsiodes over the next few weeks, we’ll finally see the return of big bad crazy Phyllis Newman (Gina Tognoni). The power player has recently turned into more of a sidekick to Jack Abbot (Peter Berman), but will soon be a force of nature in her own right once again.

Young and the Restless spoilers tell us in a recent interview with Michael Fairman’s On-Air On-Soaps, Gina Tognoni offered Y&R spoilers fans some nuggets about what’s coming up for Phyllis and Billy Abbott (Jason Thompson) as they continue to pursue revenge against Victor Newman (Eric Braeden).

After acknowledging that Tognoni misses the recently departed Burgess Jenkins, calling him a “great guy” she added that new Billy – Jason Thompson – is “just so gorgeous.” Phyllis’ portrayer said that if TPTB do hook up Billy and Phyllis, she hopes “they don’t do it too quick.”

Tognoni said she would prefer it to build slowly so the audience is invested in the characters. But let’s get real, Y&R fans have been cheerleading a “Philly” pairing for a while. Despite their ties to Jack and Victoria Newman (Amelia Heinle), plenty of fans are shipping Billy and Phyllis. The Young and the Restless spoilers indicate that we will definitely see a Billy and Phyllis hook-up!

In the interview, Tognoni discussed the Passkey plot and how critical that was to what’s happening, but at the time of their talk, she obviously couldn’t talk about the big thing going down right now which is Victor’s arrest for the Marco Annicelli plot.

However, Tognoni did say that although it was Marco that physically put his hands on Phyllis, “it was Victor who truly violated Phyllis” and said that was hard because it meant Phyllis lost control. But it seemed like Phyllis was 100% in control when she had Adam Newman (Justin Hartley) kidnapped.

And that fact might come into play soon. Phyllis has never been caught by the Newmans for that dirty deed. If Victor finds out, he would no doubt try and leverage that to benefit himself given the legal dilemma he’s currently facing.

When asked if Tognoni thought that Phyllis would face consequences for kidnapping Victor’s golden boy, she said, “I think you can probably see her fall from grace.” Even if Phyllis doesn’t face jail time for the nabbing – perhaps she could plead insanity – it will still tarnish her public image.

While Tognoni has said that some fans tweeted her that they love that fiery Phyllis is back, she says “as if she left!” Perhaps it’s just that fiery Phyllis was on the back-burner simmering until she’s ready to boil over and take Victor down.

And it looks like that’s what will happen in coming days. Phyllis tells her story to the GCPD and with the backing of evidence provided by Luca Santori (Miles Gaston Villanueva), the cuffs will go on Victor and Phyllis can get ready for vengeance.

When Fairman asked Tognoni if Phyllis might be the one to take down The Mustache, she said “we are definitely going to see her try.” And Y&R fans can’t wait to see that happen. It seems fitting that Phyllis should be the instrument of Victor’s potential downfall after what was done to her…

What do you think Y&R fans? Are you ready for Phyllis to be bold and risk it all to take down Victor? Share your comments below and be sure to check back with CDL every day for more “The Young and The Restless” spoilers including day-ahead spoilers.