BY Heather Hughes on January 4, 2016 | Comments: one comment
Related : Soap Opera, Spoiler, Television, The Young and the Restless 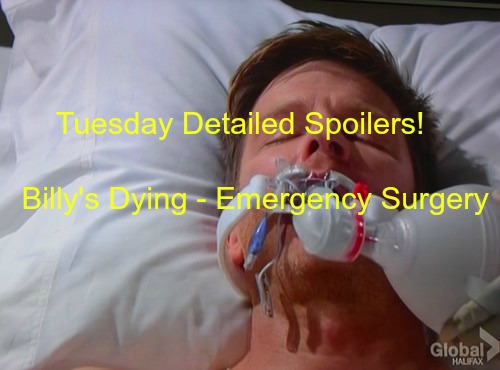 “The Young and the Restless” spoilers for Tuesday, January 5, tease that Paul (Doug Davidson) will try to get to the bottom of what really happened to Billy (Burgess Jenkins). Billy’s bookie will be called to the police station to answer some questions. Paul will point out that Billy texted several bets to a burner phone.

Kevin (Greg Rikaart) will send a message to the number and the bookie’s phone will go off. Paul will indicate that the bookie had better start talking if he doesn’t want to end up in jail. The bookie will reply that he had a scuffle with Billy, but he didn’t hit him with a car. Paul will indicate that they’ll need to check out the vehicle to be sure.

At the penthouse, Chelsea (Melissa Claire Egan) will tell Adam (Justin Hartley) that Billy’s kids are upstairs with Connor (Gunner and Ryder Gadbois). Adam will say he knows there’s been a lot of tension, but Billy doesn’t deserve to go through this.

They’ll discuss how Billy and Victoria (Amelia Heinle) are meant to be together. Adam will suggest that Chelsea should go to the hospital to check on Billy.

Meanwhile, Dr. Shelby (Terrell Tilford) will try to stabilize Billy’s heart. Outside his room, Jill (Jess Walton) will rip into Victoria and the Abbotts for turning their backs on Billy. Nikki (Melody Thomas Scott) will try to stop Jill’s tirade.

Jill will suggest that Nikki has always stood by Victor (Eric Braeden) even though he treated Billy horribly. After her rant, Jill will tearfully confess that she needs someone to blame for all of this.

Nearby, Noah (Robert Adamson) will explain the accident to Victor and state that he doesn’t want to run from what he did. Victor will hint that the consequences of coming clean could be devastating. Noah will indicate that Marisa (Sofia Pernas) knows about his involvement.

Chelsea will show up at the hospital to offer her support. Victoria will be disappointed that Billy returned to the same dark place after Adam’s release. Chelsea will insist that Billy needs Victoria. Back in Billy’s room, Ashley (Eileen Davidson) will suggest that she’s the one who’s supposed to die.

Traci (Beth Maitland) will enter and wonder what Ashley is talking about. Ashley will say she means the youngest shouldn’t die first.

Jack (Peter Bergman) will go to Billy and apologize for his refusal to help him. Jack will promise that if Billy will pull through, he’ll be there for him from now on. Jill will give everyone updates on Billy’s condition. Billy will need emergency surgery to release the pressure in his brain.

The procedure is risky and Billy will only have a 50-50 chance of survival. Victoria will go to Billy’s side and beg him to return to her. As Billy preps for surgery, Jack will say a prayer with the rest of the family.

Other “Young and the Restless” spoilers reveal that Marisa will fear she should’ve done more to help Billy. Luca (Miles Gaston Villanueva) will think there’s no reason why Marisa should care.

When Luca brings up his deal with Adam, Marisa will warn him that it’s dangerous. Luca will insist that he knows what he’s doing and everything will work out.

Victor will find Marisa and urge her to keep quiet about Noah. Marisa will suggest that they both want to protect Noah from the repercussions of what he’s done. In Victor’s office, Luca will tell Adam to go ahead and turn in the info on Victor. Adam will reply that they agreed to turn in their fathers at the same time.

Luca will say he’ll move forward as soon as he has enough information. Victor will get suspicious when he walks in. Adam will say they were talking about a mining deal. Once Luca’s gone, Adam will tell Victor that they’ll be rid of the Santori family soon.

Adam will add that the company will be run by the man who should be running it.

Noah will give Marisa the news that he’s decided to keep quiet about Billy. Noah won’t feel right about doing it, but he’ll think it’s in Victoria’s best interest. Marisa will think Noah can cover it up and no one will have to know he was involved.

They’ll embrace as Luca watches from nearby. Y&R viewers will be anxious to see if this leads to more trouble for Noah. Stick with the CBS soap to see what lies ahead in this love triangle.