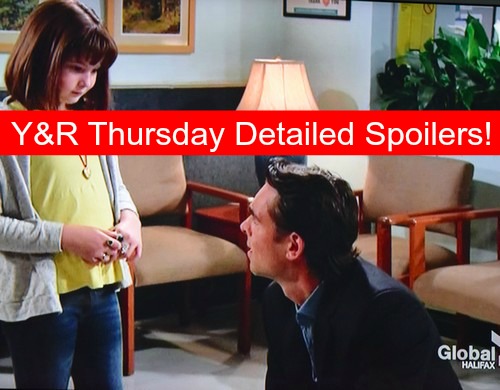 “The Young and the Restless” spoilers for Thursday, January 14, tease that Billy’s (Jason Thompson) out-of-body experience will give him a new perspective. At the hospital, Billy’s loved ones will wait for him to die. Billy’s spirit will watch everyone grieving in the waiting area.

He’ll suggest that Jack (Peter Bergman) should lean on Phyllis (Gina Tognoni) to get through this. Billy will also try to comfort Victoria (Amelia Heinle).

When Billy sees how much pain Jill (Jess Walton) is in, he’ll say he loves her. Billy will insist that he won’t be letting any of them down anymore. Meanwhile, Chelsea (Melissa Claire Egan) will look outside the penthouse to investigate the noise she heard.

The elevator door will already be closed, but Adam (Justin Hartley) will be sitting on the floor with his hands raised. A black hood will be covering Adam’s head.

At Top of the Tower, Mariah (Camryn Grimes) will ask Noah (Robert Adamson) what’s been going on with him lately. Noah won’t be in the mood to chat. He’ll head to Victor’s office and announce his plans to confess.
Victor won’t approve of Noah’s idea and he’ll point out that it won’t help Victoria. Victor will declare that Noah will be on his own if he chooses to go against his advice. Billy’s spirit will pop in and listen to their argument. Noah will still think a confession is best, but Victor will believe he should just start a potential charity in Billy’s name.

After Noah leaves, Victor will murmur about Billy being a gambling drunk. However, Victor will admit that he got his grandchildren and a nice business deal from Billy. It seems Victor has at least a couple of things to be grateful for.

A few moments later, Chelsea will show up looking for answers about Adam’s trip. Victor will make a call and learn that Adam didn’t take the flight he set up. He never boarded the Newman jet. Chelsea will be fearful of what that might mean.

Other “Young and the Restless” spoilers say Kevin (Greg Rikaart) will let Mariah know that he closed the deal with Victor. Out-of-body Billy will hear the news and give Kevin an earful. Mariah and Kevin will find Noah drinking again. Mariah will bring up the driver that hit Billy. She’ll be sure the police will get a lead soon. Noah will frown at the thought.

At Crimson Lights, Victoria will talk to Nikki (Melody Thomas Scott) about how her kids will grow up without their father. Billy’s spirit will walk in and tell the children how great their mom is. Victoria and Nikki will be amazed when Katie utters her first word: “Dada.”

Back at the hospital, the Abbotts will head into Billy’s room. They’ll believe the end is near. Jill will wonder if Billy’s soul has already passed on. Outside the room, Billy’s spirit will watch what’s happening. Delia (Sophie Pollono) will appear and offer guidance to her father.

When Billy says he’s not sure he should go, Delia agrees he should stick around. It will give Billy the opportunity to make things right.

Billy will tell Deila that he loves her before approaching his bed. Victoria will arrive to see her love one last time. Suddenly, the monitors will beep and show brain activity. The Abbotts will be in shock by the unexpected turnaround.

Y&R viewers will be anxious to see if Billy uses his second chance wisely. Stay tuned to the CBS soap for updates on Billy’s attempt to improve his life.