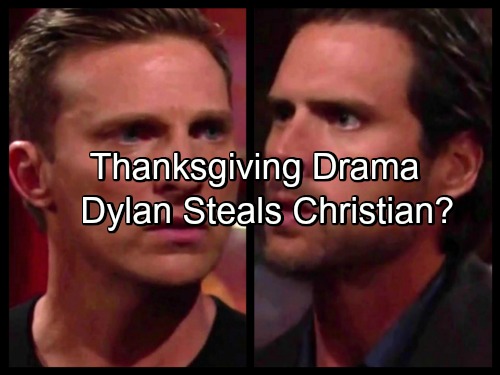 The Young and the Restless (Y&R) spoilers and updates for the week of November 21 to November 25 tease that some major drama is coming up on the CBS soap. It looks like things are going to get a little chaotic for several Genoa City residents. Thanksgiving will bring some shocking moments and surprising twists.

Devon (Bryton James) will have a hard time controlling Hilary (Mishael Morgan) this week. Of course, that’s nothing new. Devon should probably give up and let Hilary do what she wants. She’s going to anyway! No matter what Devon says or does, Hilary can’t resist a hot scoop.

It appears Hilary will cause a bit of a disturbance when Devon sends her out to do a fluff piece. Hilary could care less about feeding the homeless. She just wants juicy gossip and she’ll see the opportunity to get some at Crimson Lights.

Billy (Jason Thompson) and Phyllis (Gina Tognoni) could get tangled up in Hilary’s web. They’ll have to be careful or they’ll become her next big story. However, Phyllis will manage to give Billy some advice regarding Jack (Peter Bergman). Although Phyllis hasn’t won Jack over yet, she’s not giving up. Phyllis won’t want Billy to give up either.

Y&R spoilers say Phyllis will urge Billy to make up with his brother. She knows it won’t be easy, but it never hurts to try. Jill (Jess Walton) will echo the sentiment during another chat with her son. She’ll tell Billy that forgiveness can be a powerful thing.

Billy misses his bond with Jack and he’d like to repair the damage. Jack may not be ready to take that step yet, but Billy will give it his best shot. Across town, Victoria (Amelia Heinle) will contemplate Travis’ (Michael Roark) proposal. She doesn’t realize Travis slept with Michelle (Kelly Frye), so it’s hard for her to understand what brought this on.

Travis loves Victoria, but popping the question may have had something to do with his remorse. Nevertheless, Travis might as well prepare for the inevitable. Victoria will learn he cheated on her soon enough.

Other Young and the Restless spoilers state that Sharon (Sharon Case) will face off with Nikki (Melody Thomas Scott) again. She’ll end up regretting her outburst, but at least she’ll be on better terms with Dylan (Steve Burton). Sharon and Dylan will decide to share a holiday meal with Chloe (Elizabeth Hendrickson) and her loved ones.

When they show up at the penthouse, Nick (Joshua Morrow) and Chelsea (Melissa Claire Egan) will be heading over to the ranch. Sharon and Dylan will want to talk to Christian for a minute, but Nick won’t be in the mood to pity them. He’ll brush right past so he can enjoy time with his son.

The pain will almost be too much for Dylan to bear. He’ll make a choice that could send Sharon reeling. Dylan will do whatever it takes to be in Christian’s life. Will he ditch Sharon to be with the baby at Victor’s (Eric Braeden) place? Will he try to steal Christian at some point?