The Young and the Restless Spoilers: Casting Shakeups – Major Soap Stars to Return to Y&R After Jill Farren Phelps Firing? 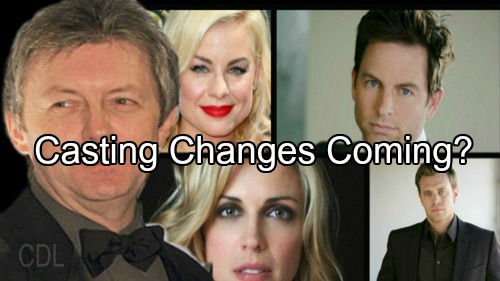 “The Young and the Restless” spoilers reveal that Jill Farren Phelps has been fired as the executive producer of the CBS soap. Mal Young has stepped up as Phelps’ replacement. Now everyone is wondering if additional changes might be on the way. We could see writing shifts or even casting shakeups in the near future.

Phelps had her favorites, but other stars were given the shaft during her stint. You never really know the whole story when it comes to behind-the-scenes details. However, there’s always buzz floating around that gives us a pretty good idea.

Take Billy Miller (ex-Billy), for example. He reportedly requested some time off every now and then to pursue other projects, but he couldn’t get that plan approved. No agreement could be made, so Miller headed over to “General Hospital.”

Now that Phelps is gone, would Miller be interested in coming back? Once Miller’s contract expires at GH, he might be willing to return for the right deal. Miller could even be cast in a new role rather than resuming his role as Billy. He’s been gone long enough that it might work.

Soaps make moves like that occasionally. In any case, fans love Miller and Y&R would be smart to snatch him up.

Next, we have Michael Muhney (ex-Adam). This homecoming would be a little trickier. Muhney was forced out after sexual harassment allegations emerged, so bringing him back would come with some risks. Regardless of what Muhney did or didn’t do, they may want to steer clear of any potential drama.

Nevertheless, “The Young and the Restless” could find themselves needing another Adam down the road. Justin Hartley scored a role in “This Is Us,” a new primetime series on NBC. It looks like Hartley plans to stay at Y&R in some capacity, but he could change his mind later.

Hartley could easily find more primetime work and choose to leave the soap world behind. Could Muhney slip back into his old role? It’s possible. We’d have to forget about the whole plastic surgery storyline, but that’s no biggie. Adam would have different face if Hartley left anyway, so it might as well be his old one.

As for female performers, Jessica Collins (Avery) would be another one to consider bringing back. According to various exit interviews, Collins left because she was fed up with the direction of her character and the lackluster storylines she was getting. We can’t forget about the horrible exit they apparently had planned either.

Avery was originally supposed to lie about being raped, which would have been extremely out of character for his attorney who often fought for the wrongfully accused. They changed the storyline to an actual rape, which wasn’t much more appealing.

Would Collins return if she was given the appropriate material under a new producer? She might decide to get back in the soap game at some point.

Finally, there’s Kelly Sullivan (Sage). Many “Young and the Restless” viewers were outraged when Sage was suddenly killed off. Her death seemed to be solely about shock value. Sage never got to speak with Nick (Joshua Morrow) about Christian. She had barely even had the chance to process the news herself before she died.

Without Jill Farren Phelps at the helm, could Sullivan be asked back? There are plenty of scenarios that could explain Sage’s return. Her death could’ve been faked by someone sinister. Maybe there was a doppelganger and the real Sage is being held in captivity.

Perhaps Sage even had a secret twin that could Sullivan could play. Who knows? They could invent Sage’s sister, Rosemary. In other words, there are ways of putting Sullivan to work if they want her.

Would you be on board with some or all of these casting shakeups? Could you see any of them happening now that Phelps is out and Young is in? We’ll give you updates if we hear about any more changes. Voice your opinion in the comments below and don’t forget to check CDL often for the latest “Young and the Restless” spoilers, updates and news.