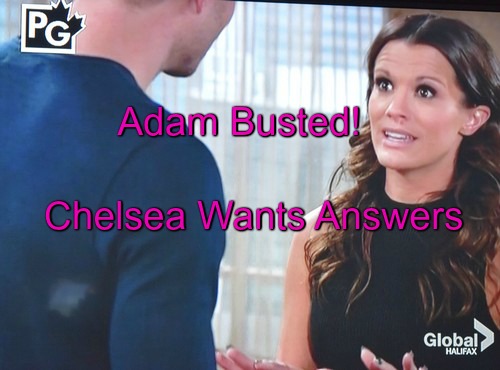 “The Young and the Restless” spoilers for Friday, January 29, tease that Victor (Eric Braeden) will try to talk Abby (Melissa Ordway) into staying at Newman Enterprises. Abby will demand to know what Adam (Justin Hartley) is working on. Victor will insist there’s nothing to know. As she leaves, Abby will suggest that they have different ideas about what’s best for Newman.

At the penthouse, Adam will try to convince Chelsea (Melissa Claire Egan) that things are different this time with Victor. Chelsea won’t buy it. She’ll think working with Victor can only end in disaster.

At the hospital, Natalie (Mara McCaffray) will tell Victoria (Amelia Heinle) that she wanted to apologize to Billy (Jason Thompson). Phyllis (Gina Tognoni) will step outside with Natalie. She’ll make it clear that Victoria doesn’t know Billy is involved in the scheme and she’s not going to find out.

Phyllis will return to Billy’s bedside and let him know that Natalie won’t be a problem for them.

At Newman Enterprises, Victor will learn that Chelsea found out about the plan and he won’t be happy about it. Adam will offer reassurance. They’ll consider how to proceed with Luca (Miles Gaston Villanueva). Adam will think Victor needs to go away for a while so Luca will let his guard down. Victor will go along with the idea and he’ll let Victoria know that he won’t be in the office.

Victoria will be assigned the task of keeping a close eye on Natalie. Victor will urge Victoria to be careful, but she should also be fair. At the lab, Neil (Kristoff St. John) will start talking about Devon’s (Bryton James) investment. Devon will want Neil to cut the bull; he’s tired of him acting like a concerned father. Neil will try to have a conversation with Devon, but they’ll just end up arguing.

Dr. Neville (Michael E. Knight) will try to calm them down. He’ll bring up the fact that Gwen (Nadine Nicole) quit. Elsewhere, Jack (Peter Bergman) will call for Ashley’s (Eileen Davidson) return to Jabot. Ashley will think she needs to stay on board with Dr. Neville’s project. Jack will be protest, but Ashley won’t budge.

Other “Young and the Restless” spoilers reveal that Abby will show up and give Jack some bad news. He’ll be surprised when Abby says she doesn’t want to work for Jabot; she wants to work with her mom instead. Dr. Neville and Ashley will agree to let Abby take over Gwen’s position. Jack will leave disheartened. Later, Phyllis will offer her support and Billy will let Jack know that he’ll be returning to the company.

Back with Ashley and Dr. Neville, she’ll be concerned about the possibility of Abby learning the truth about her treatment. Dr. Neville will wonder if they’re ever going to talk about the kiss they shared. Ashley will dismiss the discussion.

At the athletic club, Hilary (Mishael Morgan) and Nikki (Melody Thomas Scott) will get into a fight over the affair with Neil. Hilary will want Nikki to back off, but Nikki will point out that it’s none of Hilary’s business. Neil will step in and end their argument. At the bar, Devon will hand over some divorce papers to Neil. He’ll want Neil to pass them along to Hilary.

At Top of the Tower, Neil will give Hilary the papers. He’ll suggest that they can be together if she signs. Hilary will be suspicious. She’ll realize this is another tactic to get her back with Devon. Neil will blurt out that he can’t love Hilary like he used to. Hilary will find Devon and tell him that she can’t sign the divorce papers.

Back at Newman, Nikki will come clean about the fake affair. When Victor learns Nikki just wanted attention, he’ll kiss her and say they’re going on a second honeymoon. Meanwhile, Chelsea will continue to nag Adam about his plot. Adam will finally admit that he’s was forced into this partnership.

Chelsea will realize that Adam is being blackmailed. She’ll demand to know what Victor is holding over him. Y&R viewers will be anxious to see what excuse Adam comes up with. Adam desperately wants to keep the truth about Christian under wraps, but it’s bound to come out sooner or later. Stay tuned to the CBS soap for updates on Adam’s struggle to keep his secret.