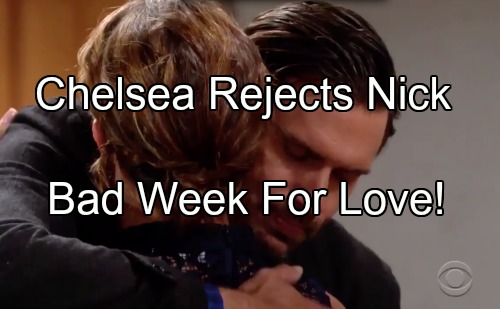 The Young and the Restless (Y&R) spoilers for September 26-30 tease that we’ll see many characters step out of their comfort zones. First, Billy (Jason Thompson) will have a new attitude. After being rejected by Phyllis (Gina Tognoni) again, Billy will finally accept her decision. She wants Jack (Peter Bergman) and he’ll try to handle that.

Billy will seek Jack’s (Peter Bergman) forgiveness as well as Victoria’s (Amelia Heinle). He betrayed his brother and he hasn’t been treating his ex with respect either. Billy will decide that he’s going to be a better man. Meanwhile, Jack won’t have that same mentality. He’s still furious over the affair and everything that came with it.

As the scandal rages on, Jack will take his anger out on his laptop and anything else in sight. He’ll just to release everything that’s been building inside of him. Nevertheless, The Young and the Restless spoilers reveal that Phyllis will stay positive. She’s willing to do whatever it takes to win back her husband. Phyllis won’t give up her marriage without a fight.

Jack will become frustrated with Phyllis’ constant attempts to reconnect. He just wants to check out of this situation entirely. Y&R spoilers state that Jack hasn’t lost sight of his revenge goal. When the time is right, Jack will set a trap for his betrayers. It sounds like Billy and Phyllis are going to pay the price.

Jack hasn’t forgotten about Jill (Jess Walton) or Victor (Eric Braeden) either. They’ll get what they have coming sooner or later. Nikki (Melody Thomas Scott) will continue to worry about Jack and Victor’s war. She knows this could get ugly, but what can she do? Nikki can’t control either one of them.

Victor will certainly have some schemes going on this week that could spell trouble. In the meantime, Ashley (Eileen Davidson) will have to take charge during a crisis. That should be no biggie for Ash. She’s fierce when she wants to be. Elsewhere, Cane (Daniel Goddard) will run into a big problem and how he reacts could lead to a bigger one.

Across town, Devon (Bryton James) will buy GC Buzz. The Young and the Restless spoilers say Hilary (Mishael Morgan) will be scratching her head over the business move, but Devon will believe it’s worth the risk. Unfortunately, this new venture won’t turn out quite like they thought it would.

Over the next few weeks, Hilary will face some struggles at work. That’s not good news, but everything will probably turn out OK. Hilary typically finds a way to get what she wants. Even if she doesn’t, Hilary tends to adjust accordingly. She’s a tough cookie and a bad deal won’t keep her down.

Finally, Chelsea (Melissa Claire Egan) will feel the need to put a few walls up with Nick (Joshua Morrow). Sharon (Sharon Case) and Faith (Alyvia Alyn Lind) will start pushing Chelsea in Nick’s direction, but it’s just too soon. Chelsea will try her best to help Nick understand that she’s sticking to the single life – at least for now.

Some intriguing storyline shifts are on the way. We’ll give you updates as more details emerge. Stay tuned to Y&R and don’t forget to check CDL often for the latest Young and the Restless spoilers, updates and news.