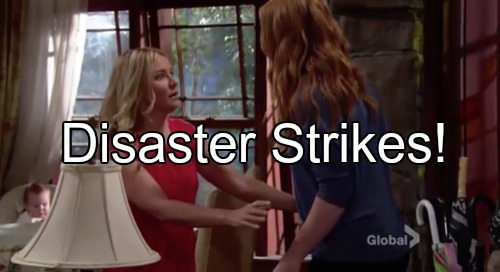 The Young and the Restless (Y&R) spoilers tease that disaster will strike Genoa City on Thursday’s episode, June 16. The details aren’t entirely clear, but a major mishap is coming up on this week’s new Y&R episodes.

As Sharon (Sharon Case) cares for Sully, Mariah (Camryn Grimes) will burst in with shocking news. Young and the Restless spoilers warn she’ll explain that there’s been a horrible accident and 911 needs to be called immediately.

Sharon will process Mariah’s updates and try to get an ambulance on the scene ASAP. Something truly terrible must’ve gone down. It seems like there’s always some kind of calamity going on in this town. Y&R spoilers claim anyone and everyone is at risk on any given day.

It’s possible that Faith (Alyvia Alyn Lind) has been injured while playing. Then again, maybe a collision has occurred near the property.

Perhaps this accident will serve as a way to pile on guilt for Sharon. There may or may not be any main Y&R characters involved, but it might not even matter. If this is another car wreck, Sharon is sure to be a complete mess. She’ll be flooded by the memories of Sage’s (Kelly Sullivan) final moments.

The Young and the Restless spoilers suggest that Sharon will face a battle with her shame next week. She longs to be free from the dreadful heaviness she feels. There’s no escaping the weight of Sharon’s secret. It’s with her every minute of every day.

Unfortunately, Sharon can’t really solve her problems by coming clean. She’ll would just trade one issue for another one. Once everyone finds out that Sully is actually Christian, Sharon could lose the baby she’s come to know and love.

She could end up swapping her guilt for total despair.

If Sharon is forced to give up her “son,” her whole world will crumble. Sharon’s marriage to Dylan could be sent into turmoil and her bond with Nick may face serious damage. Even the sight of Sully’s empty crib would tear Sharon apart.

Regardless of who’s involved in this accident, you can bet that it will affect Sharon. By the time Friday’s Y&R episode rolls around, Sharon will be in desperate need of comfort. She’ll try to stay calm, but her secret is taking a toll.

Stick with the CBS soap to see how much longer Sharon can go on like this.