The Young and the Restless (Y&R) Spoilers: Dylan Suspects Sharon and Nick of Cheating – Love Blooms for Summer With Luca 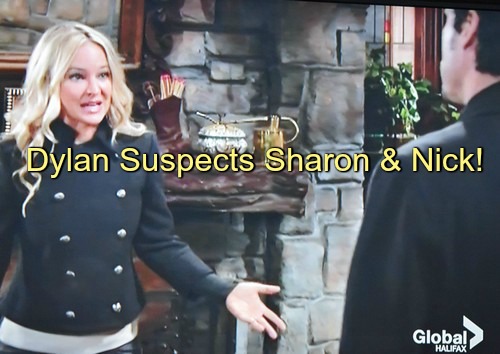 “The Young and the Restless” spoilers tease that Summer (Hunter King) will try to get to the bottom of the trouble Victor (Eric Braeden) is stirring up in upcoming episodes this week and next week. Summer was alarmed when she got the news that Victor wanted Luca (Miles Gaston Villanueva) gone.

She’ll go to Dylan (Steve Burton) with her concerns about the fate of the Santori heir. Summer will suggest that Victor ordered Adam (Justin Hartley) to kill Luca.

Summer will undoubtedly be relieved when she finds out Luca is alive and well. In fact, it appears love could bloom between Summer and Luca in the near future. “The Young and the Restless” spoilers indicate that Luca will turn up the charm and Summer will begin to fall for him.

Noah (Robert Adamson) won’t be pleased when he gets updates on their romance, but he’s got bigger problems to deal with at the moment. It seems Summer will have to handle this little weasel on her own.

Meanwhile, Dylan and Sharon’s (Sharon Case) relationship could hit a major roadblock. Y&R spoilers reveal that Dylan will start to notice just how cozy Sharon and Nick (Joshua Morrow) have been getting lately. In addition, Sharon will still be pretty peeved with Dylan for refusing to help Noah out of his current predicament. All of that could add up to intense drama.

After another bonding session between Nick and Sharon, Dylan will demand to an explanation from his wife. He’ll want to know if he has a reason to be worried. Sharon will likely argue that Nick has simply been helping her through her crisis. Sharon thinks Dylan obviously has no desire to intervene in Noah’s situation, so why shouldn’t she turn to Nick?

Dylan will reiterate that he’s just doing his job and Sharon shouldn’t ask him to bend the rules for her son. Sharon and Dylan might be able to talk through this disagreement, but it’ll only be a temporary fix if that’s the case. Deeper issues are clearly emerging for this once happy couple.

It looks like Nick is the one Sharon is starting to rely on to get her through the tough times. That trend may continue if Dylan and Sharon keep drifting apart. Once the Sully reveal finally arrives, things could completely fall apart. Stick with the CBS soap to see how much longer Dylan and Sharon will last.