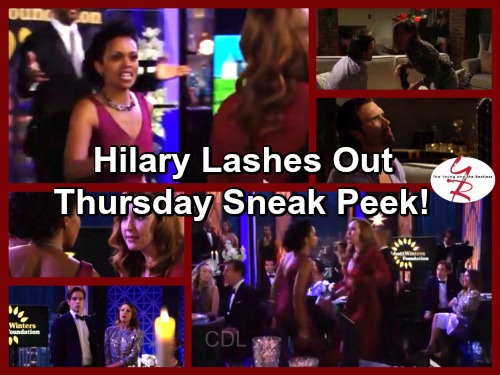 The Young and the Restless (Y&R) spoilers for Thursday, December 29, tease that things will suddenly get awkward for Chelsea (Melissa Claire Egan). She just shared a New Year’s Eve kiss with Nick (Joshua Morrow) and now she doesn’t know what to do with herself. Chelsea wasn’t really prepared for this romantic turn.

Y&R spoilers say Nick will quickly pick up on Chelsea’s nerves. She’ll leap to her feet and announce that she should wake up Connor (Gunner and Ryder Gadbois) so they can go. Nick will grab Chelsea’s hand and urge her to stay. He won’t want Chelsea to shut him out when they’re on the verge of something big. 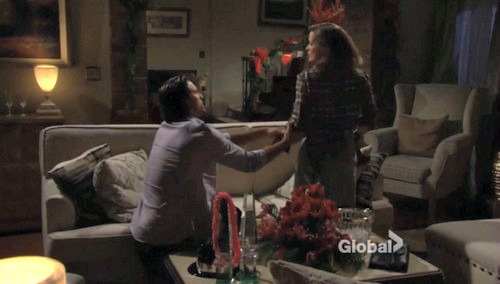 Of course, Chelsea may not have enjoyed the kiss as much as Nick did. Then again, maybe Chelsea enjoyed it too much. She may be worried about the path they’re headed down. Regardless, you can bet that Chelsea is dealing with some guilt. Adam (Justin Hartley) hasn’t been gone that long and he was truly the love of Chelsea’s life.

It looks like it’ll be next week before Nick and Chelsea talk about that kiss. Until then, we can watch an epic showdown at Top of the Tower. Mariah (Camryn Grimes) just exposed Hilary’s (Mishael Morgan) ruthlessness with an equally ruthless stunt. 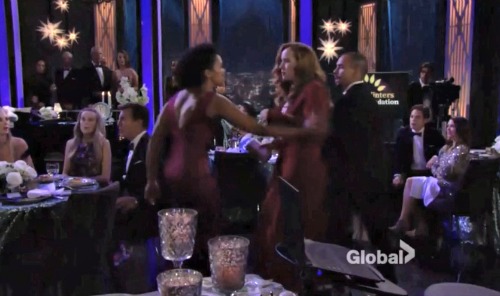 The Young and the Restless spoilers state that a raging Hilary will shove Mariah. Thursday’s preview video shows Hilary shouting, “How dare you do this to me!” Mariah will indicate that it’s simply payback. After Mariah’s tumble on live TV, Hilary deserved to be publicly humiliated. Mariah gave Hilary what she had coming.

Hilary won’t see this situation from Mariah’s point of view. Perhaps she’ll argue that Mariah has no proof. Besides, Hilary feels like Mariah was moving in on her territory. She knew it was only a matter of time before Devon came crawling back. Hilary used Mariah’s fall to speed up the process. 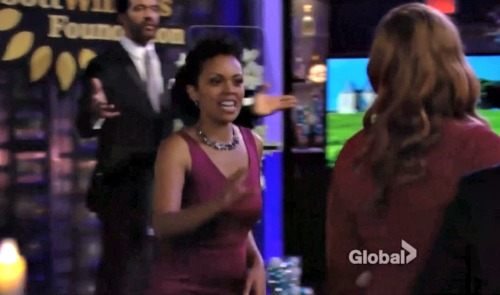 Mariah won’t care about any excuses or denials. She’s furious with Hilary for making her a punchline and she had to give her a dose of revenge. Chloe (Elizabeth Hendrickson) and Kevin (Greg Rikaart) will gape at the faceoff in front of them. However, it appears Kevin won’t be all that surprised.

Kevin will tell Chloe that Hilary messed with the wrong woman. Mariah is a firecracker who doesn’t let people push her around. We’ll give you updates as more Young and the Restless news comes in. Stay tuned to Y&R and don’t forget to check CDL often for the latest Young and the Restless spoilers, updates and news. Come and join in the LIVE discussion on our Facebook Page!

Go behind the scenes with the cast of #YR as Genoa City celebrates New Year’s Eve on Thursday! https://t.co/qxMRigdQqu pic.twitter.com/AoQqpGWLO1