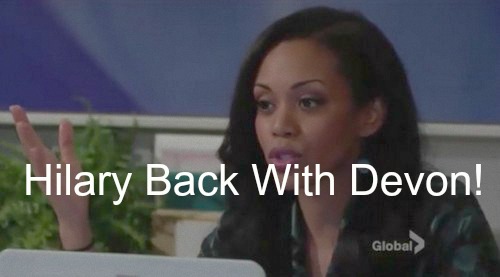 “The Young and the Restless” spoilers tease that Hilary (Mishael Morgan) will have a surprising realization. Devon (Bryton James) has pretty much given up hope on reuniting with his wife, but it seems he threw in the towel just a little too soon. Hilary’s love for Neil (Kristoff St. John) will fade and she’ll start to remember the love she shared with Devon.

When Devon gets updates on Hilary’s retuning feelings, he’ll be overjoyed. Hilary will apologize for turning her back on Devon, but he’ll insist they should leave all of that in the past. They’ll recommit to each other and look to the future.

It sounds like it won’t be long until Devon and Hilary are hitting the bedroom and rekindling their passion. Many “Hevon” fans will be pleased to have these two back together. Hilary and Devon have certainly faced their fair share of obstacles since they tied the knot. Even their honeymoon was cut short thanks to Neil.

Once Hilary and Devon’s relationship is on solid ground, they’ll feel safe to play around with other aspects of their lives. “The Young and the Restless” spoilers say Hilary will decide she’s not content to sit on the sidelines in Genoa City. She’ll want to run with the big dogs and she’ll think some type of power play is in order.

We don’t know for sure what Hilary has in mind, but it will include a scheme. Naturally, it will also involve plenty of cash. Money is power on the CBS soap. Devon will support Hilary’s goal in any way he can. Y&R viewers can expect Devon to write a check and cheer Hilary on.

Devon may be in Hilary’s corner, but that doesn’t mean everyone else will be. Hilary’s objective could ruffle a few feathers. Hilary has been known to create a plot or two in an effort to get what she wants. That part of Hilary’s personality will resurface in the coming weeks.

The business world can be cutthroat and Hilary will join in the fierce competition. Will Hilary succeed in her latest endeavor? Time will tell, but it’s obvious that Hilary is going to give it her all. Stick with “The Young and the Restless” to watch the claws come out.

So Y&R fans, what do you think about the news that Hilary will finally recall the love she feels for Devon? Will Neil be satisfied with how things pan out? Will Hilary’s new scheme go according to plan? Voice your opinion in the comments below and don’t forget to check CDL often for the latest “Young and the Restless” spoilers, updates and news.