The Young and the Restless (Y&R) Spoilers: Is Ian Ward Behind Adam Newman’s Kidnapping? 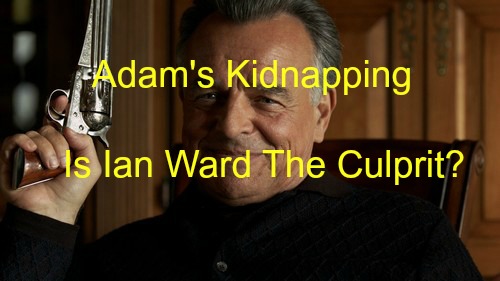 “The Young and The Restless” (Y&R) spoilers tease that Adam Newman’s (Justin Hartley) kidnapping may be tied to the return of a villain on the Genoa City scene. All signs seem to point to Marco Annicelli (Peter Bergman), but could it be a bad guy from closer to home?

Could it be that Adam’s former Paragon partner in crime Ian Ward (Ray Wise) is out of jail and scheming again? Ian was determined to take down Newman Enterprises but failed spectacularly – even the portrait of The Mustache survived the blaze.

It sure seemed like Ian gave himself up to the cops pretty easily there at the end – then was sent back to prison. However, we all know that Ian seems to have a revolving door at the joint because he was in and out of it whenever he wanted.

It would be easy enough for Ian to waltz out of lock up and nab Adam since Ian used to live in the building. Ian might still have a key to the apartment across the hall – where Sage Newman (Kelly Sullivan) is now living.

If Sage isn’t home, Ian could have lurked inside that apartment, waited on Adam then snuck up on him as he entered the elevator. Y&R spoilers have teased for a while that Ian could be back and that crazy Patty Williams (Stacy Haiduk) might be back for sweeps as well.

Ian may have taken Adam in revenge for Adam reuniting with Victor Newman (Eric Braeden) when they were supposed to destroy his dad together. What’s scary about Ian being the possible kidnapper is that he might not want money to give Adam back.

Ian is a lunatic – he might take Adam to torture him for fun (and profit) – or to punish Victor personally since he couldn’t destroy him professionally. There are plenty of motives for Ian to steal Adam away. After all, the last time Ian saw Adam, they had a brawl and Adam left him for dead in the fire.

Plus, when Ian was taken away by the Feds, he swore to Victor that this is not over. Of course, Victor has no shortage of enemies. The kidnapping could certainly be the work of Marco or the Santori clan. But Ian is a compelling candidate for the culprit since he’s got unfinished business with the Newmans.

What do you think Y&R fans – is charismatic devil Ian back in Genoa City to stir up trouble – starting with this kidnapping? Share your thoughts in the comments below and come back to CDL often for more “The Young and The Restless” spoilers and news.