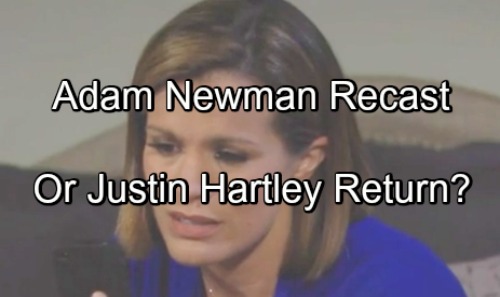 The Young and the Restless (Y&R) spoilers tease that Adam’s (Justin Hartley) exit storyline appears to be underway. Justin Hartley will be taking a break from the CBS soap while he’s filming This Is Us for NBC. The plan is for Hartley to focus on his new show for now. Whether or not he returns to Y&R on a more permanent basis will depend on the success of This Is Us.

If the new drama is a hit, it seems likely that Hartley will bolt from daytime television altogether. Based on the buzz surrounding This Is Us, we’d say things are looking good. Unfortunately, that may mean bad news for Young and the Restless viewers. We may have to adjust to another Adam.

There’s already been plenty of speculation about Hartley’s replacement. A casting call similar to Adam recently went out and fans immediately suspected that Hartley was exiting. Still, they might choose to wait for a while. Hartley may be willing to get back in the game full-time at Y&R if This Is Us flops.

However, we probably shouldn’t bet on that. There will always be other shows to audition for and Hartley may be committed to moving forward in primetime. Regardless, The Young and the Restless has apparently set up an excellent exit strategy in preparation for Hartley’s break.

Victor (Eric Braeden) kidnapped Adam and now he has the opportunity to live a new life with his family. In order to make that happen, Adam will have to change his name and leave Genoa City behind. Perhaps Adam will get ready to skip town and send for the fam later.

Chelsea (Melissa Claire Egan) and Connor (Gunner and Ryder Gadbois) could hang out in GC until the investigation has died down. It’s going to look awfully suspicious if they skedaddle right away. As far as we know, Melissa Claire Egan isn’t going anywhere. Chelsea will undoubtedly remain on canvas, which means Nick (Joshua Morrow) could still cozy up to her.

That would provide some angst when Adam eventually returns to Genoa City. If there’s a recast, they might opt for another plastic surgery route. It would be a little repetitive, but Adam may hide his identity again.

If Justin Hartley comes back, maybe a heroic act will lead to a reduced sentence or a pardon for Adam. We could see Adam arriving just in time to disarm a bomb and save the whole town at some grand gathering. Whatever the case, soaps always find a way to make problems vanish.

Until then, Chelsea may be the only one who knows where Adam is. There’s even a chance that Adam will change his mind and bail on his family. Adam is a fugitive and he might decide that he doesn’t want Chelsea or Connor to live in constant fear.

At the moment, Adam intends on pursuing a future with Chelsea. Let’s hope he sticks to the plan! If Adam has to be gone, it would be nice to imagine him happily awaiting his reunion with Chelsea and Connor.

Will Y&R manage to give Adam a few scraps of happiness? Time will tell, but it sounds like some interesting scenes lie ahead. We’ll give you updates as details emerge. Stay tuned and don’t forget to check CDL often for the latest Young and the Restless spoilers, updates and news.