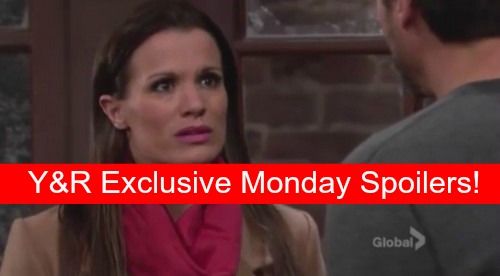 “The Young and the Restless” spoilers for Monday, January 18, tease that Chelsea (Melissa Claire Egan) will turn to Nick (Joshua Morrow) for some help. Chelsea can’t seem to get any answers about Adam’s (Justin Hartley) whereabouts. Victor (Eric Braeden) won’t let Chelsea in the loop on what Adam was up to. It’s obvious that Victor has a few secrets he’d rather keep to himself.

Paul (Doug Davidson) and Dylan (Steve Burton) will be on the case soon, but we all know they take their sweet time with any investigation. Chelsea might feel like Nick is her last hope to save Adam. Nick is typically at odds with his brother, but he’ll probably be willing to do what he can.

Chelsea and Nick have been growing closer lately. Sage (Kelly Sullivan) and Adam have also developed a strong connection. If Adam and Sage end up getting together down the road, there’s a chance Nick and Chelsea may create sparks of their own.

“The Young and the Restless” has had Kevin and Mariah stuck in limbo for a while now. They hit a snag in the bedroom, but it’s clear that there are some lingering feelings. Will they ever get past their roadblock? We’ll have to wait and see, but Natalie could stir the pot in the meantime.

Other Y&R spoilers say Dylan’s request will shock Kevin. In Monday’s preview video, Dylan gives Kevin the news that they need him to access Victor’s personal communications. Kevin’s eyes will widen at the thought of hacking the mighty Victor Newman.

Now that Kevin has a deal with Victor, it could get ugly if he double-crosses him. It’s not a good idea to do anything behind Victor’s back. Nevertheless, Kevin is sometimes a bit of a pushover. He can usually be talked into doing almost anything. Kevin may decide to move forward in spite of the risks. Stick with the CBS soap for updates on the potential hazards ahead.