The Young and the Restless (Y&R) Spoilers: Luca Works With Mystery Figure on New Plot – Shawn Moves In with Nick and Sage 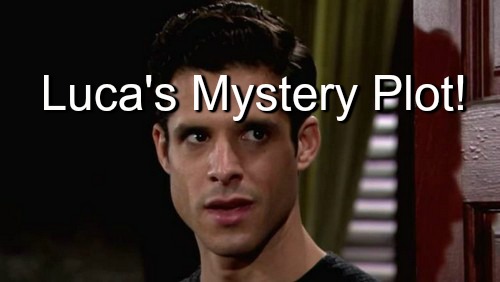 “The Young and the Restless” spoilers for Monday’s episode, March 14, tease that Jack (Peter Bergman) will want to forget all about PassKey. He’ll inform Natalie (Mara McCaffray) that they’re dropping the project. Billy (Jason Thompson) and Phyllis (Gina Tognoni) won’t be on board.

They’ll stand up to Jack and assure Natalie that the plan hasn’t changed.

The Young and the Restless spoilers say Jack will speak privately with Phyllis about all of this. He’ll fear that the Newmans will strike back with a lawsuit. There’s also Phyllis’ role in Adam’s (Justin Hartley) kidnapping to consider. Jack will let Phyllis know that he intends to keep her secret, but the threat of exposure is still there.

Phyllis will be irked that Jack would allow an opportunity like this to pass them by. She’ll argue that this project could save Jabot. Later, Billy and Phyllis will once again shoot down Jack’s idea. They’ll make it clear that they have no intention of backing down.

Meanwhile, Shawn (Devon Martinez) will tell Sage (Kelly Sullivan) that someone broke into her apartment. Sage will insist that she’s welcome to move in if she needs a place to stay. Shawn will accept the offer and they’ll bring her things to the house.

Faith (Alyvia Alyn Lind) will bring up Sage’s stint at Fairview, which will concern Shawn. She’ll be taken aback by the news that Sage spent time in a mental hospital. Sage will simply indicate that losing Christian was very difficult.

Shawn will suggest that letting go of her own child will be tough. Sage will show Shawn her room and she’ll get settled in.

Moments later, Nick (Joshua Morrow) will arrive and get updates on their new roommate. He’ll accuse Sage of doing this just so she can get closer to Shawn and have more control over the adoption. They’ll start to bicker as Shawn eavesdrops nearby.

Shawn will come around the corner and shout that she’ll just leave if there’s a problem. Y&R spoilers hint that this adoption process could tear Nick and Sage apart.

Other “Young and the Restless” spoilers say Nikki (Melody Thomas Scott) will worry that Judge Elise Moxley (Jensen Buchanan) will take her frustration out on Noah (Robert Adamson). Elise had to reveal the truth about the affair to her family thanks to the Newmans.

Now her life has been turned upside down and she could be tempted to make Noah pay the price.

In the courtroom, Dylan (Steve Burton) and Marisa (Sofia Pernas) will try to support Noah on the stand. Christine (Laralee Bell) will turn their testimony around to make Noah the bad guy. Billy will also contend that he doesn’t blame Noah for what happened.

Christine will try to spin Billy’s testimony her way as well. She’s hoping to make an example out of Noah.

Finally, Noah will take the stand and point out Victor’s (Eric Braeden) influence on this situation. He’ll state that he regrets listening to his grandfather’s advice. Judge Moxley will adjourn for a recess and Noah will leave with Marisa. They’ll make love in a suite and Noah will promise Marisa that she’ll be his wife.

At Crimson Lights, Dylan will try to comfort Sharon (Sharon Case) as she frets about Noah’s sentencing. On the patio, Natalie will tell Luca (Miles Gaston Villanueva) about Jack’s issues with PassKey. Luca will think maybe they should form a new team with just the two of them. Natalie will be appalled by Luca and his slimy behavior.

Once he’s alone, Luca will take an ominous phone call. He’ll say something’s a travesty and insist that it will be taken care of. What devious plot is in the works now? Stick with the CBS soap to watch Luca make his next move.