The Young and the Restless (Y&R) Spoilers: Marisa and Chelsea Betray Adam and Victor – Luca Killed in Santori Showdown?

BY Monica DelRay on February 2, 2016 | Comments: one comment
Related : Soap Opera, Spoiler, Television, The Young and the Restless 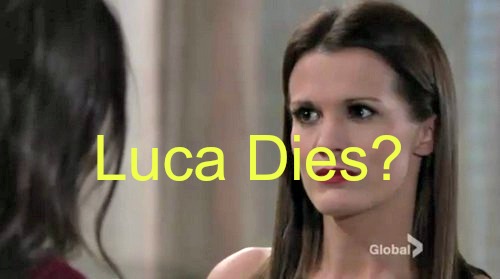 “The Young and The Restless” (Y&R) spoilers tease that Luca Santori’s (Miles Gaston Villanueva) life could be at risk thanks to Adam Newman (Justin Hartley) double dealing him on behalf of Victor Newman (Eric Braeden). Will Chelsea Newman’s (Melissa Claire Egan) meddling cost someone their life?

Adam filled Chelsea in on the secret scheme he’s working with Victor to take down the Santoris and get them out of Newman Enterprises. So far, Marisa Sierras (Sofia Pernas) believes that Adam and Luca are working together against their fathers, but she has warned Luca about Adam.

Marisa told Luca he can’t trust Adam and that he will betray him. Marisa will soon realize that she was right in her worries and will appeal to Chelsea to stop things before they get out of control. She’s at risk too since the evidence that Luca has against his father all came from Marisa.

Since she was Marco Annicelli’s (Peter Bergman) fancy lady, she knew all about his dirty deeds done for the Santoris and gave the evidence to Luca who, in turn, naively handed it over to Adam. Now Adam is ready to spring the trap and take Luca down for Victor.

Adam tells Luca that his father, the elder and scarier Santori, will know that it was evidence from Luca that got him locked up for his illegal activities. Marisa fears that Luca’s life will be at risk – and possibly her own – once the Santoris find out Luca was back dooring them with Adam.

For Victor and Adam, this is about regaining total control of Newman Enterprises. But for Luca, this is life or death, quite literally. Marisa knows just how dangerous the Santoris are and this is what she was scared would happen when Luca partnered up with Adam.

The only thing that might save Luca’s skin now is if the evidence he gave Adam was bogus and meant to draw him out to see if he was really working with Luca – or against him. But with Marisa there pleading to Chelsea to help her save Luca, will Chelsea get her hands dirty?

Will Chelsea run and try to intervene and make things worse? Will Adam bringing Chelsea in on the secret be the factor that blows this all up? Victor won’t be happy that Chelsea confirmed to Marisa that he and Adam were planning to trick Luca.

But will Chelsea and Marisa be too late? Has Adam already set Luca up to be taken out by his father? Will both Luca and his dad go down – one in a blaze of bullets and one by the law? Or has Luca been plotting with his father against the Newmans the same way Adam was with Victor?

What do you think Y&R fans? How will this scheme unfold? Is Luca naively trusting Adam or does he have an escape hatch built into this plot that will save his life? Will lives be at risk from the evil Santori patriarch when all this comes out?

Share your comments below and come back to CDL often for more “The Young and The Restless” spoilers.