‘The Young and the Restless’ Spoilers: Nick Furious About Poor Connor – Ashley Warns Jack About Billy and Phyllis

BY Heather Hughes on September 5, 2016 | Comments: one comment
Related : Soap Opera, Spoiler, Television, The Young and the Restless 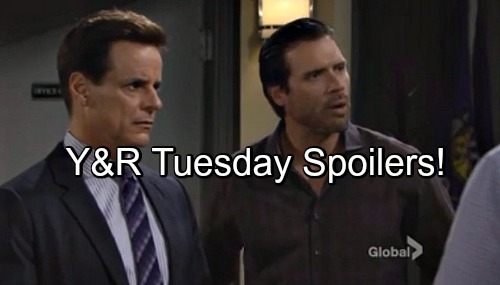 The Young and the Restless (Y&R) spoilers for Tuesday, September 6, tease that Ashley (Eileen Davidson) will sense that something is a little off within the Abbott clan. She won’t know exactly what’s up, but she’ll be determined to get to the bottom of it. Ashley will hope she can get some answers during a chat with Jack (Peter Bergman).

When Ashley wonders if Jack and Phyllis (Gina Tognoni) are still having problems, Jack will suggest that everything is looking up. They’ve been going through a rough patch, but Jack will believe his marriage is back on track. He’ll assure Ashley that his relationship is fine.

Ashley will still think something strange is going on. Phyllis and Jack might be OK, but what about Phyllis and Billy (Jason Thompson)? Jack may or may not have picked up on the weird vibe between them. Sometimes Jack seems suspicious, but other times he’s completely oblivious to the fact that something’s wrong.

Phyllis wasn’t happy with Billy’s behavior at the recent Abbott family dinner. She’s afraid Billy is going to get careless and blow their secret wide open. Phyllis has enough trouble trying to deal with Jill (Jess Walton). The last thing she needs is Billy stressing her out even more.

Billy’s frustration is getting the best of him at the moment. He loves Phyllis and she seems to love him, too. Their forced separation has taken a toll. Y&R spoilers say Billy will plead with Phyllis to just let go of her doubts. He’ll insist that he wants and needs her. Billy will beg to be together again.

Phyllis will admit that she’s missed being with Billy, but she won’t see what’s changed. Jill knows their secret and could quickly make it the talk of the town. Phyllis has considered divorcing Jack and slowly revealing her relationship with Billy. Dropping an affair bomb on Jack is a different story. 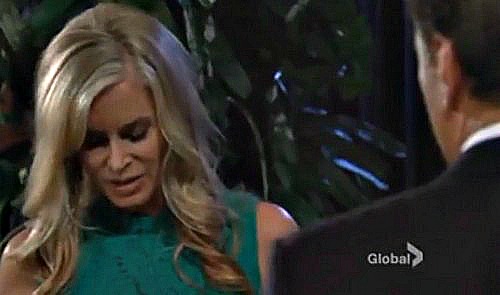 Billy doesn’t want to hurt his brother, but he’d gladly do it if it meant securing a future with Phyllis. However, Billy ultimately knows that’s not the way to get what he wants. Instead, The Young and the Restless spoilers say Billy will vow to handle Jill. He’ll think they should get to decide how to proceed, not his meddling mother.

Unfortunately, Billy’s plan may backfire. Jill isn’t someone you can mess with. She doesn’t take flak from anyone, especially her son. The Young and the Restless spoilers hint that Billy could pay the price for challenging Jill.

Meanwhile, Nick (Joshua Morrow) will also do a bit of challenging. At the police station, Nick will go on a rant. He just won’t think it’s right for Connor (Gunner and Ryder Gadbois) to sit at home without either one of his parents. Nick will ask what Dylan (Steve Burton) would do if it was Sully.

Dylan already urged Paul (Doug Davidson) to have some compassion for Chelsea (Melissa Claire Egan) in these difficult circumstances. Maybe Paul will come around on the idea of dropping or at least reducing the charges against Chelsea. Now that she’s lost Adam, Chelsea has clearly suffered enough.

How will Chelsea carry on without the love of her life? Will an Adam recast be brought in eventually? We’ll give you updates as other news comes in. Stay tuned to Y&R and don’t forget to check CDL often for the latest Young and the Restless spoilers, updates and news.

Chelsea is in BIG trouble! Should she make a run for it? #YR pic.twitter.com/3lVSPpaBIj

Will Chloe’s partnership with Victor be exposed?? #YR pic.twitter.com/LoHJtSVYz9