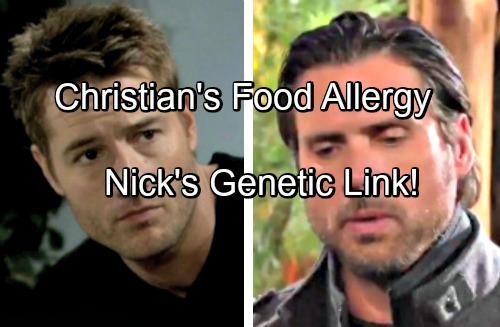 The Young and the Restless spoilers tease that Nick (Joshua Morrow) will be tagged as the genetic link to Christian’s (Jamie and Alister Tobias) food allergy reaction. Longtime fans also recall that Summer (now played by Hunter King) had a damaging allergic episode years ago. This apparent biological link will reinforce what most characters now believe about Christian’s paternity.

Everyone but Chelsea (Melissa Claire Egan) thinks that Christian is living with his paternal father. Of course, viewers also share Chelsea’s apparent knowledge which seems to confirm that Adam (formerly played by Justin Hartley) is his real dad. Yet, new head writer Sally Sussman stated in a November interview that she has no plans to link a paternity reveal to an off-screen character. 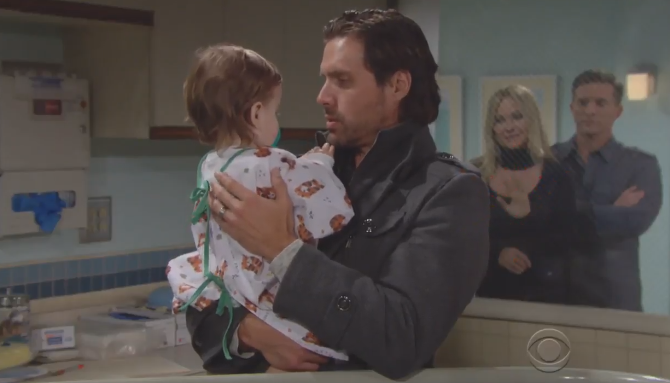 Sussman’s philosophy and her plan to not recast the Adam character anytime soon must mean that Chelsea will remain mum indefinitely. Everyone else in this fictional Wisconsin world will therefore operate on the assumption that Nick is Christian’s dad. So Sussman’s team will carry this part of exited head writer Chuck Pratt, Junior’s storyline from this point forward.

A memory refresher, or a storyline recap as the case may be is now offered: Many years ago Patty (Stacy Haiduk) intentionally kissed Summer (who was then a child, as played by Samantha Bailey) after having eaten peanut butter cookies. She did so because she saw Jack (Peter Bergman), ever an object of her obsessed mind, in a romantic position with Phyllis (then played by Michelle Stafford). Patty’s violent reprisal sent Summer into anaphylactic shock, put her in a coma and caused brain damage. Her resultant speech impairment was eventually overcome through extensive therapy. 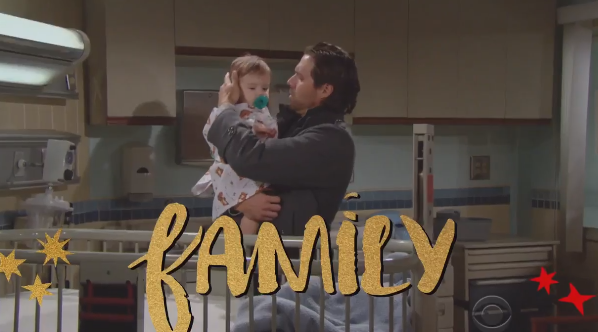 Despite the history referenced above, Nick’s current default is to blame ‘Shylan’ for withholding allergy information from him. Sharon (Sharon Case) and Dylan (Steve Burton) were once again targeted as the bad super couple, when they did nothing wrong. Possibly, Nick’s overreactions will be incorporated by the judge as he considers the best interests of this child.

Leah (Janzy Paraiso, who also goes by Janet Paraiso) was the nanny Nick hired to watch Christian and Faith (Alyvia Alyn Lind) while he and Chelsea were Christmas shopping. Nick knew that she previously watched Christian when he was living with ‘Shylan’, but didn’t know that Leah attempted to gain fame and money by selling a fake story to GC Buzz earlier in the week. Imagine how Mr. Reactionary will respond when he learns about nanny gossip’s recent attempt to exploit his child?