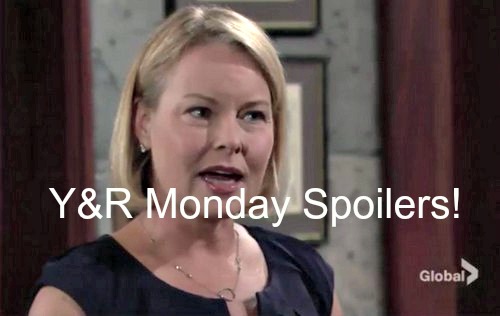 “The Young and the Restless” spoilers for the episode on Monday, March 14, tease that Phyllis (Gina Tognoni) will be anxious about Jack’s (Peter Bergman) next move. Jack has mainly been blaming Billy (Jason Thompson) for the scheme, but Phyllis knows she played just as dirty.

In Friday’s episode, Y&R spoilers know that Phyllis confesses that she was behind Adam’s (Justin Hartley) kidnapping.

Phyllis will soon wonder if she made a huge mistake by telling Jack. The Young and the Restless spoilers say she’ll ask if Jack is going to tell Adam what she did. Jack will probably stay tight-lipped for now, but he’ll grow increasingly nervous about the consequences Phyllis could encounter.

If Victor (Eric Braeden) gets updates on this, he could retaliate. Phyllis’ crime might even come out during Victor’s trial. Things are definitely going to get interesting in that courtroom. In the meantime, “The Young and the Restless” spoilers reveal that a different trial get underway. Noah (Robert Adamson) will face questions about backing over Billy, leaving the scene and covering it up.

Nikki (Melody Thomas Scott) will approach Judge Elise Moxley (Jensen Buchanan) with her fears, but Elise won’t be sympathetic. She’ll hint that maybe it’s time for the Newmans to be a little afraid for a change. On the stand, Noah will indicate that he’s sorry for everything he’s done.

However, Noah will insist there’s one thing he’s particularly sorry about.

Monday’s Y&R episode has Noah saying, “My single biggest regret of my entire life was listening to my grandfather.” After all, we can’t forget that Victor pressured Noah to conceal the hit-and-run. Then, Victor turned his own grandson over to the police. Their trust was broken and now Noah could pay the price.

Nevertheless, Noah will have plenty of people on his side. Sharon (Sharon Case) and Nick (Joshua Morrow) are certainly in Noah’s corner. Leslie Michaelson (Angell Conwell) will represent Noah in this fight to keep him out of prison. Will Noah get the verdict he’s hoping for? Stick with “The Young and the Restless” to find out Noah’s fate.

So Y&R fans, what do you think about the news that Phyllis will worry about her secret? Will word spread to Adam? Will Judge Moxley enjoying watching the Newmans squirm? Will Noah gain sympathy thanks to Victor’s manipulation?