The Young and the Restless Spoilers (Y&R): Sage in Danger as Dr Anderson’s Deadly Obsession with Nick Exposed

BY Monica DelRay on January 16, 2016 | Comments: one comment
Related : Soap Opera, Spoiler, Television, The Young and the Restless 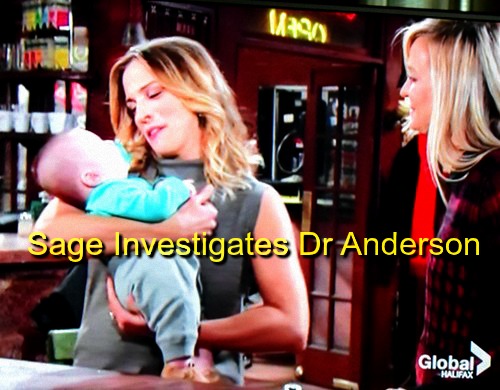 “The Young and The Restless” (Y&R) spoilers reveal that Dr Anderson (Elizabeth Bogush) can’t keep on playing her deadly games – her obsession with Nick Newman (Joshua Morrow) will soon be exposed and it’s Nick himself that calls her on her antics.

Dr Anderson has been very clever about tearing down Nick’s life brick by brick. At first it seemed like she wanted only to hurt him, but then it became more apparent that she wanted him ripe for the plucking so she could move in on him romantically. Remember that walk they took on Christmas?

Sage Newman (Kelly Sullivan) has noticed that Dr A seems to always be lurking and showing up where it’s inappropriate for her to be. Since when does a therapist go stalking her clients at home and showing up to interrupt a surprise wedding?

Either Dr Anderson is the best and most attentive doctor in the world – or the worst and a real nut job. Looks like it’s the latter. The problem with Sage being the one to figure out that Dr A is not all she’s cracked up to be is that everyone discounts her feelings on this, particularly Nick.

Sage is grieving the death of Christian – staged, of course, thanks to Dr A – so anything she says is viewed through a lens of depression and anxiety. Sage has alerted Nick before to Dr Anderson’s strange intrusiveness but he’s excused it.

And when Sage called Dr A out to her face, Dr Anderson made sure to get to Nick before Sage could and told Nick that she thinks Sage is paranoid and a little off because of her grief. So when Sage told Nick the first time that the doc was up to something, he ignored her because of Dr A’s timely alert.

But this time, Sage won’t be silenced or ignored. Y&R spoilers indicate that when Dr Anderson stops by their table at Crimson Lights, Sage snaps and tells the therapist that they’re not her patients and to leave them alone.

To make Sage seem sketchy, Dr Anderson soothes her and apologizes for the intrusion and leaves. But Sage isn’t done. She tells Nick that she thinks Dr A has a thing for him and that’s why she’s always trying to drive a wedge between them.

Nick will consider that Dr A did tell him again and again to back away from Sage, give her space, and leave her alone in her grief. First, that seems like terrible advice for a couple grieving the loss of a child. Second, Nick ignored it all and his marriage is much-improved as a result.

Sage vows to Nick that she’s going to find out what Dr Anderson is up to, whether he believes her or not. Sage will take off out of Crimson Lights like a woman on a mission – leaving Nick there to think things through. What kicks it up for him, though, is when Dr A comes back after Sage leaves.

Nick has to wonder if Dr Anderson was waiting to get him alone – and whether the doc was watching to see if Sage would leave. He decides to confront Dr A and asks flat out if she has a thing for him and says Sage told him she thinks that she’s obsessed with him.

No way will Dr Anderson confess. She’s too clever by far for that. But now Dr A knows that Sage is on to her. The doc can tell Nick again that Sage is grieving and projecting her issues onto others, but Nick won’t buy that excuse again.

Can he push harder and get Dr A to reveal something? Y&R spoilers indicate that all of Dr A’s schemes will unravel soon when Sharon Newman (Sharon Case) finds out she shares no DNA with her baby. Will Sage enlist Dylan McAvoy (Steve Burton) to help her figure out what Dr A is up to?

Dylan had issues with the doc when she denied him access to Sharon when she was at Fairview, so he already has some foundational suspicion there. Plus – Paul Williams (Doug Davidson) just handed him a detective badge – Dylan might as well break it in on this case since it affects him too.

What do you think Y&R fans? Is Dr Anderson really Sandra Allen and has she been obsessed with Nick all these years? What extremes might she go to in order to get Nick in her clutches? Will Sage be in danger at the hands of the dangerous doc?

Share your comments below and come back to CDL often for more “The Young and The Restless” spoilers and news.