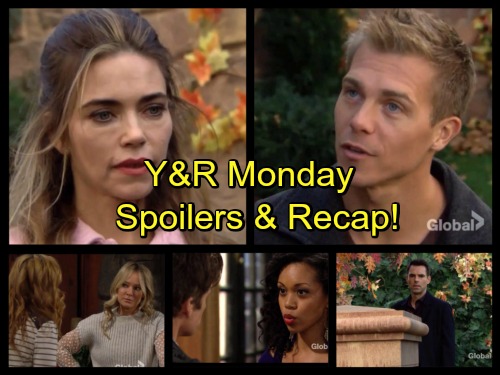 The Young and the Restless (Y&R) spoilers for Monday, November 21, tease that Mariah (Camryn Grimes) will try to talk some sense into Sharon (Sharon Case). After a huge fight, Sharon kicked Dylan (Steve Burton) out of the house. Mariah will insist that she needs to track down her husband and apologize. She’ll believe Sharon is overreacting about Faith’s (Alyvia Alyn Lind) move, too.

Mariah will argue that Faith needs to decompress at Nick’s (Joshua Morrow) place for a while. She’ll think everything will get better eventually. Sharon won’t be so sure, but Mariah will urge her to get back to work. She’ll think a distraction would be beneficial for everyone.

At Chelsea’s (Melissa Claire Egan) studio, Chloe (Elizabeth Hendrickson) will debate Sharon’s situation with Kevin (Greg Rikaart). They’ll agree that what Sharon did was wrong, but Chloe will admit she feels sorry for her. Kevin will hint that Chloe sympathizes with Sharon because they’ve both been keeping a kid from a parent.

Chloe will fly off the handle and contend that Kevin can spend Thanksgiving alone. At GC Buzz, Kevin will find Mariah and give her updates on the drama. Of course, Mariah will face drama of her own. Hilary (Mishael Morgan) will still be curious about the rest of the Christian story. She’ll vow to keep digging until she uncovers everything.

Mariah will nervously maintain that she’s told Hilary what she knows. She’ll hope that they can just drop this. Devon (Bryton James) will attempt to get Hilary on board with a lighter report. He’ll think they need to inject some positivity into the show.

The Young and the Restless spoilers say Hilary will be appalled when she reads Devon’s next assignment. It looks like it might be about a charitable organization. Hilary will reject the story, but Devon will override her veto. He’s paying for this show and Hilary will have to do her job.

After confirming Thanksgiving plans with Nick, Chelsea will go to her studio. She’ll find Sharon and Chloe bonding over the way they’re judged. Sharon will find out that Chelsea has been at Nick’s house. She was there when Faith was dropped off. Sharon will suggest that Chelsea will go along with any of Nick’s ideas. She’ll suspect that this is all about growing closer to him.

Chelsea will think that’s absurd, but Sharon will fire back that she’s kidding herself. She’ll be certain that Chelsea wants Nick. While they bicker, The Young and the Restless spoilers say Travis (Michael Roark) will beg Victoria (Amelia Heinle) to marry him. He’ll finish his proposal in the park and Victoria will state that she’ll have to mull it over.

Y&R spoilers reveal that Abby (Melissa Ordway) will hear the news a little later. She’ll advise Victoria to consider what she truly wants before moving forward. Victoria will seek guidance from Billy (Jason Thompson) as well. She’ll mention the proposal and ask what he thinks.

Billy will be afraid of turning Victoria against him. Rather than making any risky confessions, Billy will encourage Victoria to trust her instincts. Back at the park, Chloe and Kevin will manage to work through their issues. They’ll make amends and prepare to enjoy Thanksgiving together.

It sounds like love is getting quite complicated in Genoa City. We’ll keep you posted as other details come in. Stay tuned to Y&R and don’t forget to check CDL often for the latest Young and the Restless spoilers, updates and news. Come join in the live Y&R discussion on our Facebook Page!