BY Sean O'Brien on November 19, 2016 | Comments: one comment
Related : Hot Celebs, Soap Opera, Television, The Young and the Restless 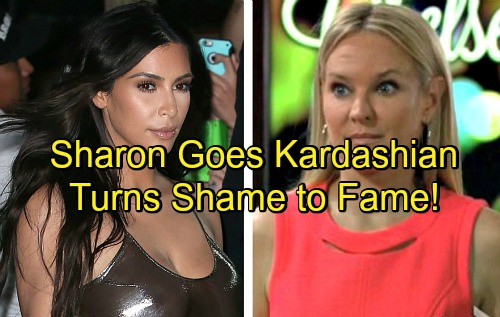 The Young and the Restless spoilers tease that Sharon (Sharon Case) will take a Kardashian turn by transforming shame into fame. Playing off the savvy approach of this popular family, Sharon will promote herself to the world. GC Buzz will serve as the connector to a worldwide audience.

The Kardashian clan built a brand name off being infamous. Their stock-in-trade became attention. And so they began living their lives in order to draw interest from a public that either wants to be like them,  can’t stand them, or at least wants to follow all of their actions.

Would the Kardashian’s be very famous if they weren’t attractive. No. And that’s where Sharon has an opportunity. She’s obviously good-looking, but she’s also quirky and prone to eruptions. An unpredictable diva whose life has been chaotic. Yes, that will sell.

Some people would hide when their personal world collapses. Not Sharon. She defends herself, which is actually inspiring. For underneath the lives of all earth’s inhabitants are many mistake-prone souls. Those nondescript people believe in redemption and are often willing to offer it to those who they don’t even know.

Sharon has had umpteen interactions with countless men, some of whom attacked her. She’s battled her in-laws, alienated friends, overcome mental health problems, had not one, but two babies stolen from her, raised her children and walked on, or over the edge of the law. She’s a resilient individual, not a failure!

The cottage has served as Sharon’s refuge for years. It’s something she gained through her first marriage. However, Sharon is not a social climber. As viewers recall, Nick (Joshua Morrow) abandoned her after Cassie (Camryn Grimes) died and took up with Phyllis (then played by Michelle Stafford). What material possessions Sharon has have been earned through life’s travails.

The Kardashian’s obviously invent many of the meanderings. That’s part of the honest in-joke they provide to their fans. Their lives are modeled, in some ways, on classic soap opera plots and are partially scripted in advance. However, they’re also real people who have built a solid business. Sharon will do the same in an unexpected fashion.

So why can’t a fictional character be patterned after real life individuals? Life imitates art. There’s not a rule that says art can’t imitate life. Hilary (Mishael Morgan) will see ratings records as she helps Sharon become a star.

What’s being proposed for Y&R shouldn’t be seen as the end of ideas. It’s a recognition and an evolution of entertainment in the modern world. Yes, executive producer Mal Young and incoming head writer Sally Sussman have the chops to pull this off. And Y&R viewers, like Kardashian fans, will want to watch as the next part of this well-known person’s life plays out.

CDL is a leading source for everything linked to The Young and the Restless. Check back regularly for Y&R spoilers and news! Come join in the live dynamic Y&R discussion on our Facebook Page!