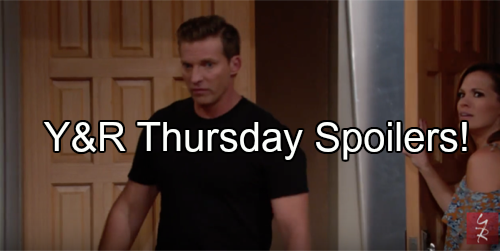 The Young and the Restless (Y&R) spoilers for Thursday, June 16, tease that Luca (Miles Gaston Villanueva) will pass along some important info to Nick (Joshua Morrow). He’ll show his research and warn Nick about the threat Travis (Michael Roark) poses.

Summer (Hunter King) will walk in and wonder what they’re discussing. They won’t divulge anything, but Summer will just be happy that they’re warming up to each other.

Later, Victoria (Amelia Heinle) will introduce her new beau to Summer at the pool bar. Summer will seem suspicious of Travis and she’ll point out that Victoria’s family is quite protective. Luca will have a private chat with Victoria about how risky this is for their company.

Victoria will suggest that Luca needs to back off. She’s running Newman, not him.

Afterwards, Travis will admit that Victoria’s family is a little on the judgmental side. After Victoria gets a call from work, Travis will join her at the office. They’ll talk about Victor and Travis will notice his portrait.

He’ll also observe that Victoria is about to lie in a press release. Victoria will think it’s the right move for this situation. Travis will decide he needs to go.

Back with Summer and Luca, they’ll debate Victoria’s romance with Travis. Luca won’t think Summer should be too worried. It’s probably not going to work out. The subject will change to Phyllis (Gina Tognoni). Summer will rant about her mom’s interference in their relationship, but Luca will remain adamant that he can when Phyllis over.

Once they arrive home, Luca and Summer will get busy in the bedroom.

Other Young and the Restless spoilers indicate that Sharon (Sharon Case) will have another horrible nightmare. In the dream, Mariah (Camryn Grimes) will say there’s been an awful accident. Sharon will see a bloody Sage (Kelly Sullivan), who still isn’t pleased that Nick doesn’t know the truth.

When Sharon wakes up, Dylan (Steve Burton) will ask what’s on her mind. Sharon will admit that she’s been having terrible dreams about Sage. Nick will stop by later and he’ll quickly realize that Sharon isn’t acting like herself.

After Nick is gone, Mariah will suggest that Sharon needs to get a grip. This secret could easily be exposed if Sharon can’t handle her guilt. Nick will meet up with Dylan at Crimson Lights.

He’ll ask if Sharon is OK and Dylan will point out that his wife is having nightmares about Sage.

At the penthouse, Chelsea (Melissa Claire Egan) will manage to secure a confession from Adam (Justin Hartley). He’ll admit that he plans on helping Ian (Ray Wise) escape. A shocked Chelsea will blow her top. If Ian goes on a crime spree, Adam will be responsible.

Adam will brush off the scheme’s riskiness, but Chelsea will think his attitude is similar to Victor’s.

Y&R spoilers say Dylan will stop by to speak with Chelsea and Adam. He’ll announce that he got some useful info from Paul (Doug Davidson). It seems Victor knew a forger named Frank Ellis. Adam will confirm that it’s true, but Frank is dead.

Dylan will fear that Adam is running out of options. However, Adam won’t be willing to accept a plea deal. Chelsea will agree that Adam needs to fight the charges.

Once Dylan leaves, Chelsea will decide to support Adam’s devious plot. She still won’t like it, but she’ll understand why Adam is desperate enough to get in this deep with Ian. Chelsea won’t know what she’d do without Adam.

They’ll share a hug and move forward with this battle together.

Will Adam regret his dangerous partnership with Ian? Stick with the CBS soap to see if bad news is headed Adam’s way.