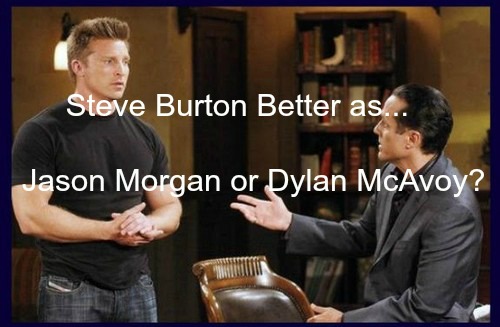 Spoilers tease that Dylan McAvoy (Steve Burton) has more drama coming his way with the reveal that baby Sully is really Christian and not his son. Burton’s prior role as Jason Morgan on “General Hospital” was Stone Cold, yet Dylan is quick to smile and be affectionate.

What do you think? Do you watch both Y&R and GH? Do you prefer Steve Burton in the role of Y&R’s Dylan McAvoy or as GH’s Jason Morgan? Which role do you think better showcases the acting skills of Burton? Which do you prefer as a fan?

When Burton moved from GH to Y&R, he commented at the time on the drastic differences between the two characters and how Dylan being a lighter, happier guy allows him to show off his own true personality which is not so serious and much more carefree.

At a glance, the differences between the two characters is instantly noticeable. Stone Cold killer Jason wore nothing but black and that ubiquitous leather jacket. In contrast, Dylan wears a wide array of clothing styles and colors that reflect his more expansive range of emotions. 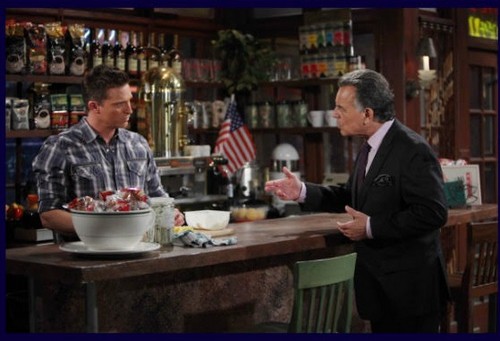 Jason was a buffed up bad boy, while the slimmer Dylan is literally and figuratively lighter. Dylan doesn’t need all that muscle since he’s not out getting in daily scraps with mob rivals or trying to intimidate other mobsters into submission. Also, Dylan smiles frequently – Stone Cold, not so much.

Both Dylan and Jason have similarities, though, in parentage. Dylan was adopted and only got to know his biological parents later. Jason was adopted by Monica Quartermaine (Leslie Charleson) because he was Alan Quartermaine’s son with another woman.

But where Dylan has been able to grow close with his bio-mom Nikki Newman (Melody Thomas Scott) while Jason consistently struggled to express love to his adoptive mother Monica or any of the Quartermaines and became estranged from them.

Other similarities are that both suffered a car wreck that injured their brains only Dylan didn’t end up with complications that left him largely emotionless. But Dylan did suffer PTSD from his time in battle, so there’s a similarity there.

Both Jason and Dylan have had baby disappointments. Dylan thought Chelsea Lawson’s (Melissa Claire Egan) baby was his and Jason was initially unsure of paternity of his kids by Sam Morgan (Kelly Monaco) and Liz Webber (Rebecca Herbst).

Also interesting was to watch both Dylan and Jason in a love triangle. With Dylan it was him and Nick Newman (Joshua Morrow) vying for Avery Bailey (Jessica Collins) while on GH, it was Jason, Liz and Sam in the triangle.

Another key difference is that Dylan is devoted to law and order. Even though he runs a coffee shop, he acts like an amateur cop when he helps dad Paul Williams (Doug Davidson). Interestingly, Jason also has ties to coffee with Corinthos Coffee (the cover business) but as Stone Cold, he operated outside the law.

But in both roles, Steve Burton has drawn praise and fan adoration. As Jason Morgan, he earned four Daytime Emmy nominations and one win in 1998, seven years after he started on GH. As Dylan McAvoy, one year into the gig, Burton landed another Daytime Emmy nod, but no wins yet.

So what do you think, do you prefer Burton as Stone Cold mob killer Jason Morgan or loving family guy and barista Dylan McAvoy? Share your comments below and be sure to check back with CDL often for more “The Young and The Restless” spoilers, news and updates.