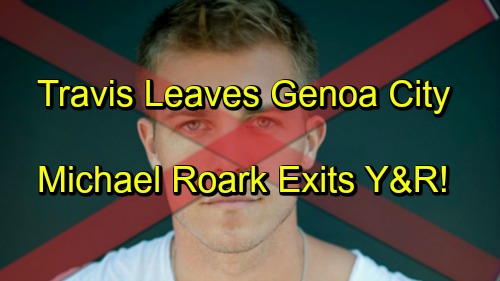 The Young and the Restless (Y&R) spoilers tease that Travis (Michael Roark) is walking away from Victoria and leaving Genoa City behind. Michael Roark just gave Y&R fans a heartfelt goodbye note on Twitter as he announced his exit from The Young and the Restless. He noted that he made the decision to move on, but he’s grateful for all the support he’s received in this role.

Of course, this seems like the perfect time to wrap up Travis’ story. The choice may have actually been a mutual one. Sally Sussman, the new head writer of The Young and the Restless, plans to focus on a handful of core characters. Travis isn’t what she has in mind for the show’s future.

“Tricky” had a good run, but Y&R is gearing up for a Billy (Jason Thompson) and Victoria (Amelia Heinle) reunion. However, many Young and the Restless viewers seemed to enjoy having someone new to throw in the mix. It wouldn’t have been a bad idea to keep Travis around, but Y&R may have provided a ridiculously low offer to nudge Roark out the door.

Whatever the case, Michael Roark has finished up his run and will be taking on new challenges in his career. He pointed out that this has been an “unexpected and special chapter” in his life. Roark thanked Amelia Heinle and several members of the CBS family for the wonderful experience.

Roark also offered some words of comfort for disheartened “Tricky” fans. He stated that Travis loves Victoria, but just couldn’t quite tackle his inner demons. Roark suggested that maybe Travis could return to Genoa City one day when he’s a little wiser.

Will you miss Travis and his portrayer, Michael Roark? Would you like to see Travis make a comeback eventually? Did you approve of Victoria and Travis’ romance or are you anxious to see her reunite with Billy? We’ll give you updates as more news comes in. Stay tuned to Y&R and don’t forget to check CDL often for the latest Young and the Restless spoilers, updates and news.