The Young and the Restless (Y&R) Spoilers: Victor and Marisa Make Noah a Guilty Liar – Blame Game as Billy Struggles to Live

BY Heather Hughes on January 3, 2016 | Comments: one comment
Related : Soap Opera, Spoiler, Television, The Young and the Restless 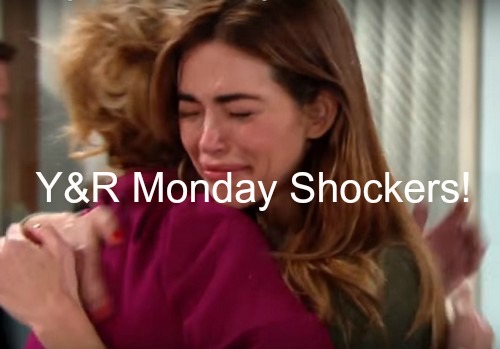 “The Young and the Restless” (Y&R) spoilers for Monday, January 4, tease that Jill (Jess Walton) will be in total despair as Billy (Burgess Jenkins) fights to survive. Jill will feel like she’s the only one in Billy’s corner. As she sits by his beside, Jill will urge Billy to wake up so he can prove all the naysayers wrong.

In the hallway, Phyllis (Gina Tognoni) will lash out at Jack (Peter Bergman) for refusing to loan Billy the money he asked for. Victoria (Amelia Heinle) will hear them and suggest that Billy is the only one to blame for his choices.

Phyllis will counter that Billy didn’t run over himself and he was only gambling to support his business venture. Phyllis will state that Jack and Victoria share some responsibility in what happened to Billy.

At Newman Enterprises, Nikki (Melody Thomas Scott) will think Victor (Eric Braeden) should go to the hospital for Victoria’s sake. Victor will reply that it’s time Victoria sees what Billy is all about. It’s clear that Victor will think “Billy Boy” had this coming.

At the police station, Paul (Doug Davidson) will question Marisa (Sofia Pernas) about what she saw in the parking garage. Marisa will think back to when she saw Noah (Robert Adamson) driving off, but she’ll keep it to herself. Marisa will indicate that it was dark and she didn’t see anyone around.

Noah will meet up with Mariah (Camryn Grimes) and Kevin (Greg Rikaart) at Crimson Lights. They’ll talk about Billy’s ordeal. Kevin will be concerned that Billy ran into trouble because he gambled for the investment money. Noah will pipe up that the only person to blame for all of this is the driver who hit Billy. Marisa will arrive and she’ll pull Noah aside for a private conversation.

“The Young and the Restless” spoilers say Marisa will believe Noah had a good reason for covering up what he did. Noah will be confused, which will prompt Marisa to explain what happened. Noah will remember feeling the bump when he accidentally put the car in reverse. He’ll want to go to the police, but Marisa will urge him to stay silent.

Back at the station, Kevin will give Paul updates on Billy’s gambling. Paul will tell Kevin to spill everything he knows. Meanwhile, Dr. Neville (Michael E. Knight) and Ashley (Eileen Davidson) will bicker over whether Abby (Melissa Ordway) should be notified about Billy.

Ashley won’t want to spoil her honeymoon, but Dr. Neville will point out that telling Abby is the right thing to do. Once Stitch (Sean Carrigan) and Abby hear the news, they’ll decide to cut their trip short.

Jill won’t be pleased when Victor comes to the hospital to support Victoria. Jill will rant that Victor doesn’t care about Billy and has no reason to be there. A few moments later, Victoria will say she wants to find the person responsible for doing this to Billy. Victor will reply that he has his investigators looking into the matter.

Jack and Victor will begin to argue. Victor will suggest that Jack is to blame for casting Billy out. A furious Jack will stomp off. After Dr. Neville arrives with Ashley, he’ll pick up Billy’s file and snap a picture. Jill will come in and discuss Billy’s condition with Dr. Neville.

Back at the hospital, Noah will rush in and tell Victoria he needs to speak with her about Billy’s accident. When the monitors start beeping, Victoria will yell for a doctor and turn her attention to Billy. Victor will tell Noah he needs to keep his mouth shut.

Victor will point out that whatever Noah has to say won’t save Billy. Y&R viewers will be anxious to see how long this secret will stay under wraps. Stick with the CBS soap to find out how long Noah will keep quiet.