‘The Young and the Restless’ Spoilers: Victor Decides To Testify, Adam Erupts in Fury – Luca Blames Travis for Newman Sabotage 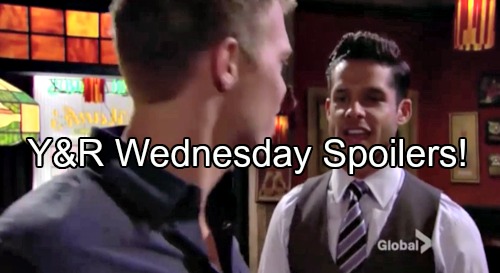 The Young and the Restless (Y&R) spoilers for Wednesday, June 22, tease that Adam (Justin Hartley) will make a video of Connor (Gunner and Ryder Gadbois) at home. Chelsea (Melissa Claire Egan) will start to worry that they won’t be able to share family moments like this if the trial doesn’t go well.

It’s hard to have any kind of faith in Ian Ward (Ray Wise).

Meanwhile, Victor (Eric Braeden) will be removed from solitary confinement. He’ll get his privileges back and head to the infirmary. Meredith (Alicia Coppola) will admit that she spoke with Christine (Laralee Bell) about testifying. Victor will urge Meredith to stay out of it.

He’ll suggest that he can take the stand instead. Victor will plan on discrediting Ian’s claims.

Casting News: Neil’s Parents Coming to GC to Save Son!

Once Adam learns Meredith changed her mind about testifying, he’ll figure Victor is up to something. He’ll pay Victor a visit and show him the video of Connor. Adam will want Victor to think of Connor’s love for his father. He’ll also mention that Victor pushed his loved ones out of the picture.

Adam will be sent on his way, but he’ll intend on learning the identity of Victor’s secret helper. Adam will realize Victor must have someone on the outside who’s doing his dirty work. Later, Victor will call his partner and ask her to do one final deed.

If Victor has his way, this setup will cause Adam’s world to crumble.

At Sharon’s (Sharon Case) house, Nick (Joshua Morrow) will admit that he’s concerned about her. He’ll want Sharon to know that she can always open up to him about anything. Nick will end up rushing to Newman when another crisis hits.

Since Victoria has been spending all of her time with Travis (Michael Roark) lately, Nick will decide to give him a call. At the pool bar, Billy (Jason Thompson) will notice Travis and Victoria cozying up to each other. He’ll make a smart remark and Victoria will reprimand him.

Travis will take a call from Nick and hand the phone to Victoria. She’ll head to the office right away.

Travis will push Billy to be civil, but that won’t be something Billy is interested in. At Newman, Victoria will receive updates on the latest disaster. Summer (Hunter King), Luca (Miles Gaston Villanueva) and Nick will suggest that this is sabotage.

Y&R spoilers say Luca will think Travis could be behind it.

Victoria will be offended at first, but doubt will quickly start to creep in. Luca will arrive at Hank’s bar to grill Travis about his possible involvement. You can expect an epic brawl on Thursday. Elsewhere, Jack (Peter Bergman) will hope that Phyllis (Gina Tognoni) didn’t work too hard on her trip.

He’ll wonder if Phyllis managed to fit some pleasure in while she was away.

Jack will want to reconnect after their time apart, but Phyllis will make up a work-related excuse. She’ll do just about anything to avoid spending time with Jack. The guilt is really piling up for Phyllis. At Billy’s place, he’ll recall the passion he shared with Phyllis during their break from reality.

Other Young and the Restless spoilers reveal that Sharon will talk to Chelsea at Crimson Lights. She’ll mention the idea of Mariah (Camryn Grimes) joining the team and Chelsea will be open to it. Chelsea will change the subject to Adam’s trial. She’ll feel like Adam needs to be with Connor. It’s important for fathers and sons to maintain a strong bond.

Sharon will nervously imagine that Chelsea’s face has become Sage’s. Chelsea will question what’s wrong, but Sharon will insist she’s fine. Back at the penthouse, Adam will meet up with Chelsea. He’ll shatter his glass by throwing it against the wall. Adam will erupt with anger and yell that he hopes Victor dies in prison.