The Young and the Restless (Y&R) Spoilers: Victor To Trade Marisa for Adam – Mariah Knows Natalie Really The Target 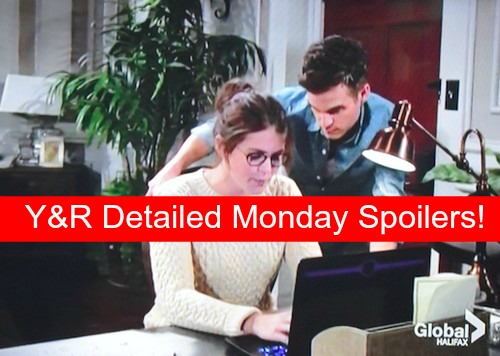 “The Young and the Restless” spoilers for Monday, January 18, tease that Chelsea (Melissa Claire Egan) will try to persuade Dylan (Steve Burton) that everything is fine in her relationship with Adam (Justin Hartley).

Dylan will still suspect that maybe this is just a case of infidelity, but Chelsea will know that Adam is in danger. She’ll suggest that the Santoris were involved in Adam’s disappearance.

Elsewhere, Paul will give Victor (Eric Braeden) the news that Chelsea reported Adam missing. Victor will declare that Adam is away on business, but Paul will question why he has people out looking for him. Noah (Robert Adamson) will show up and they’ll all discuss Billy’s (Jason Thompson) recovery.

Once Paul is gone, Victor will tell Noah that he doesn’t need to worry about the investigation. Then, Victor will ask Noah to do him a favor.

At Top of the Tower, Luca (Miles Gaston Villanueva) will tell Marisa (Sofia Pernas) that he’s not working with his father to bring down Victor. Luca will add that he doesn’t think his father is behind Adam’s disappearance. This isn’t his style.

Noah will pop in and tell Luca that Victor needs him. Marisa and Noah talk about the accident cover-up as well as the past. Suddenly, two men will arrive to take Marisa away.

In Victor’s office, he’ll tell Luca that he received a ransom note. Victor will think it was from Luca’s father and he’ll announce that he’s arranged a trade. They’re handing over Marisa to get Adam back. Luca will protest, but Victor will reply that it’s already done.

Luca will find Noah and tell him about the trade. Noah will seem like he’s defending Victor, which will anger Luca. He’ll tell Noah that he should stay out of this.

At Crimson Lights, Sharon (Sharon Case) will mention that Mariah (Camryn Grimes) is getting a lot of takeout food. Mariah will clam up about it. When Nick (Joshua Morrow) and Sage (Kelly Sullivan) walk in, Sage will immediately head over to hold Sully. Mariah will let Nick know that she doesn’t trust Dr. Anderson (Elizabeth Bogush).

After Mariah exits, Nick and Sharon will chat alone. Sharon will mention that Dr. Anderson gave her advice about her meds. Dr. Anderson doesn’t think Sharon needs to rely on them anymore. Nick will express concern. In fact, Nick will admit he’s concerned by a lot of Dr. Anderson’s guidance lately.

Nick will bring up how Dr. Anderson doesn’t want Sage to hold Sully. Sharon and Nick will realize that Dr. Anderson gave them different sides of the story. Nevertheless, Sharon will insist that Nick is worried about nothing. After their conversation, Sharon will walk back over to Sage. They’ll talk about the instant bond a mother feels with her child.

Other “Young and the Restless” spoilers reveal that Kevin (Greg Rikaart) will smell a con. When Kevin hints that something is fishy is going on with Natalie (Mara McCaffray), she’ll insist that she’s not conning anyone. Natalie will realize that they’re dealing with a defective program, but she’ll think Kevin is the one who filled her head with big dreams.

Mariah will show up and chat with Natalie after Kevin gets called to the police station. They’ll question each other’s status with Kevin. Mariah will comment on their failed sexual encounter. Natalie will admit that she’d like to be with a guy like Kevin, but she has doubts about it working out.

At the station, Kevin will learn that Dylan wants him to access Victor’s personal communications. Once Kevin gets over the shock, he’ll dial Natalie and say she needs to hack Victor. Kevin will get a call from Victor and he’ll head to his office.

Later, Victor will pull out the ransom note and let Kevin have a look. When they mention “the girl,” Nick will appear and ask for more info. Back in Natalie’s suite, she’ll check out Victor’s email. Mariah will think that the girl mentioned in the ransom note is Natalie. Y&R viewers will be anxious to see how this mess gets sorted out.

At Dylan and Sharon’s place, he’ll get a kiss when he comes home. Dylan will mention that he’s a detective now. Sharon will yell, “No!” It looks like Sharon is once again worried about Dylan’s safety.

Now that Dr. Anderson is urging Sharon to mess with her meds, she’s sure to get even more agitated. Even so, Sharon is probably right. Dylan is bound to run into trouble soon. Stick with the CBS soap to see what’s in store.