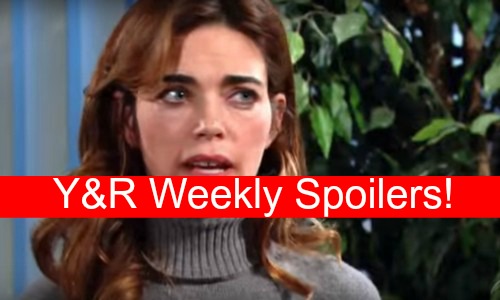 “The Young and The Restless” (Y&R) spoilers for the week of January 4 through 8 indicate trouble for the Abbotts and the Newmans from seen and unseen forces. Here’s what you need to know to get ready for the week.

First, it seems like Victor Newman (Eric Braeden) knows far more about Billy Abbot’s (Burgess Jenkins) accident/beating than he should. Paul Williams (Doug Davidson) mentioned there were no cameras in the garage because of construction, but he may be wrong.

How else would Victor know that Billy was beaten by his bookie then run over? Plus, Victor knew that Noah Newman (Robert Adamson) ran over Billy before Noah himself finds out courtesy of Marisa Sierras (Sofia Pernas).

Victor will order Noah not to implicate himself and Marisa to keep zipped and Noah will scramble off to cover up any evidence that he was the one who ran over Billy Boy. How does Victor leverage Marisa? Does he have more dirt on her than we know?

The big action this week happens mostly at the Genoa City hospital. Jill Abbot (Jess Walton) lashes out at all the Abbotts and Newmans over their treatment of Billy but focuses on Victor and Victoria Newman (Amelia Heinle) in particular.

Phyllis Summers (Gina Tognoni) agrees with Jill that many people have done Billy dirty. Jill will plead with her son to come back to her. Dr Simon Neville (Michael E Knight) comes along with Ashley Abbott (Eileen Davidson) to the hospital.

Moments before Billy crashes, Neville realizes they’re using the wrong treatment protocol. Billy goes into code blue and they will be able to save him, but he’s on a ventilator and barely hanging on.

Victoria will weigh whether she should unplug him. Seems a little soon, right? Neville wants to try one of his cutting edge yet sketchy treatments to bring Billy back from the brink but Billy’s doc will protest that Neville was ousted from the hospital.

Ashley will encourage the Abbotts and Victoria to let Neville have a shot at saving Billy – she thinks he may be Billy’s only hope. As Neville and Ashley begin to work closely not only on Billy’s treatment but hers, he finds he’s feeling warm and fuzzy about her.

Chelsea Lawson (Melissa Claire Egan) comes to the hospital and offers her support to Victoria who greatly appreciates it. In the midst of Billy’s crisis, Jack Abbott (Peter Bergman) makes some big decisions about Jabot in light of family problems.

Chelsea debates whether she needs to cut and run from her marriage because she doesn’t want to put herself and Connor at risk if Adam is circling the drain again. Adam avoids a near miss with Chelsea this week – did she catch him scheming?

Also making plans for the family business is Victor who talks to Nick Newman (Joshua Morrow) about his plans for Newman Enterprises. Does he share what’s going on with Noah or just how he plans to deal with the Santoris?

Mariah Copeland (Camryn Grimes) is avoiding thinking about her New Year’s kiss with Kevin Fisher (Greg Rikaart). She seemed to enjoy that more than their last intimate experience that was a big fat flop.

Mariah likes Kevin but their intimacy issues are problematic – but Mariah had better make a move now because hacker Natalie (Mara McCaffray) will be in Genoa City soon and Kevin has a huge crush on the tech babe.

Dr. Sandy Anderson (Elizabeth Bogush) makes another move to ruin Nick’s life – she’ll go after Sage Newman (Kelly Sullivan) and upsets her to try and throw a wedge in their now happier relationship. Sage will come out of the talk unsure about Nick.

Victor and Chelsea will chat and find that they see eye to eye – is this the new alliance Victor makes this week or is someone else in the sights of the Moustache? Marisa maybe?

Abby Newman (Melissa Ordway) will rush back because of Billy’s crisis ending her honeymoon with Stitch Rayburn (Sean Carrigan). This could be the beginning of the end to them. Abby will soon wonder if he’s really her happily ever after.

All this and more this week in Genoa City – watch then come back to CDL for detailed daily “The Young and The Restless” spoilers plus advanced spoilers and news.