The Young and the Restless (Y&R) Spoilers: Victoria Splits With Billy, Calls Off Wedding – Victor Dragged Back to Jail 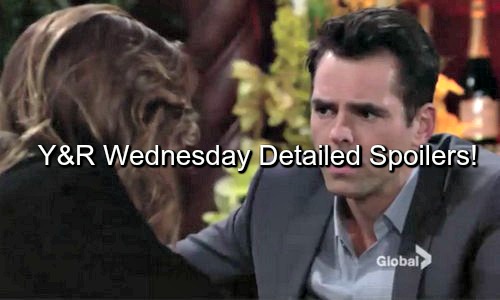 “The Young and the Restless” (Y&R) spoilers for the Wednesday, March 9 episode tease that relationships will end and battles intensify. Victor (Eric Braeden) will press Jack’s (Peter Bergman) buttons during a confrontation at Top of the Tower. The argument will nearly turn physical, but Michael (Christian LeBlanc) will break things up. Victor will toss some threats around and leave in a huff.

Jack will be fed up with Victor’s aggressive behavior. He’ll call Paul (Doug Davidson) and demand that Victor be locked up again. Since Victor threatened Jack, Dylan (Steve Burton) and Paul will take action. They’ll find Victor at his office and inform him that he violated his bail.

The Young and the Restless spoilers say Neil (Kristoff St. John) will point out that no one got hurt during the quarrel. However, Paul and Dylan will stand by their decision.

Elsewhere, Michael will mull over the idea of taking Victor’s case. Phyllis (Gina Tognoni) will still want Michael to throw it and Jack will agree that Victor must be stopped. Michael will wonder how Lauren (Tracey E. Bregman) feels about all of this.

Y&R spoilers predict Lauren will ask what Michael would do if Victor put another man in her bed. Michael will admit that he’d kill Victor if he stooped that low. Lauren will believe Michael knows what he needs to do.

A short time later, Michael will arrive at the police station and offer his services to Victor. Since Victor’s previous lawyer wanted him to take a plea deal, he was fired. Michael will declare that everyone deserves a fair trial.

Victor will like what he hears and he’ll hire Michael immediately. If Michael goes through with his plan, it could mean bad news for Victor’s chances in court.

Other “Young and the Restless” spoilers reveal that Phyllis will try to take the blame for the scheme. She’ll go to Victoria (Amelia Heinle) and insist that she pressured Billy (Jason Thompson) to get involved.

Victoria will contend that Billy knew what he was doing. Phyllis will insist that Billy loves Victoria and she shouldn’t let this come between them.

Billy will be heartbroken when Victoria officially calls off the wedding. Meanwhile, Jack will also confront Phyllis about her string of lies. It seems several relationships are crumbling in Genoa City.

At the penthouse, Sage (Kelly Sullivan) will confide in Chelsea (Melissa Claire Egan). She’ll be worried about Nick’s (Joshua Morrow) doubts regarding the adoption. Later, Nick will talk to Sharon (Sharon Case) about what’s happening at Newman Enterprises.

He’ll be concerned about the vote and he won’t want to get involved in all the drama. Sharon will assure Nick that everything will be fine. He just has to follow his heart.

Chelsea will show up and pull Sharon aside. She’ll accuse Sharon of meddling in Nick and Sage’s marriage. Naturally, Sharon will disagree and they’ll begin to argue. Nearby, Sage will finally decide she needs to clear the air with Nick. She’ll wonder why Nick is trying to find ways to sabotage the adoption.

Nick will admit that he thinks Sage just wants a replacement for Christian. Sage will be outraged by the notion and she’ll stomp off. Let’s hope Shawn (Devon Martinez) doesn’t get updates on their current strife. The growing conflict could cause their adoption efforts to hit a snag.

Y&R viewers will be anxious to see if other problems will arise. Stick with the CBS soap to find out what’s in store for Nick and Sage.