The Young and the Restless (Y&R) Spoilers: Week of February 29 – End of an Era as Victor Arrested, Betrayed by Trusted Family 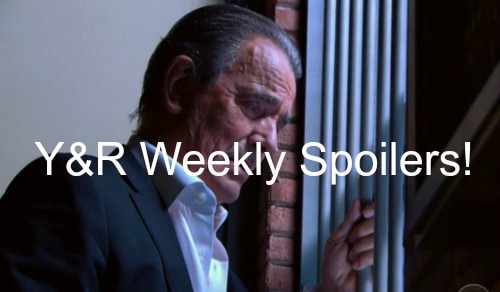 “The Young and The Restless” (Y&R) spoilers for the week of Monday February 20 to Friday March 4 reveal episodes that describe the end of an era as Victor is arrested, betrayed by his own family. The Mustache loses all his allies and must face the music for the past year of bad deeds he’s done to many in Genoa City.

Looks like the stress of everyone turning on him plus the arrest has an impact on Victor. Does he have a heart attack? Stroke? Victor ends up in a room at Genoa City hospital rather than the GCPD lock up – at least for today.

While his family gathers to check on him, Victor snaps and rages calling them all traitors. It’s not pretty. Victoria will lay into Adam Newman (Justin Hartley) this week and tells him he’s as bad as their dad since he helped Victor cover his tracks.

Victoria confronts Billy about keeping things from her – no matter that her dad is the real villain. Looks like Billy will calm her down and remind her that she’s the one in control of Newman Enterprises now. What will Victoria do?

Nikki Newman (Melody Thomas Scott) has to think long and hard about her future. Is she done with Victor? Or will she stand by her man now that she got what she wants – him out of power and vulnerable?

Kevin Fisher (Greg Rikaart) and Luca have a confrontation this week – no doubt over hacker Natalie Soderberg (Mara McCaffray). Phyllis isn’t done with Victor and finds a new ally in her quest to punish him – is it Nikki? Whom?

Stitch Rayburn (Sean Carrigan) is in trouble this week. The Young and the Restless spoilers predict Hilary Curtis (Mishael Morgan) makes a power play at the Jabot Labs on the medical research project. Ashley Newman (Eileen Davidson) has to cover her tracks but will Hilary ferret out her secret anyway?

Christine Williams (Lauralee Bell) rants to Sharon Newman (Sharon Case) about the Newmans always getting away with everything. Sharon is afraid Christine will take out her frustrations on Noah Newman (Robert Adamson).

Later, Sharon and Dylan argue over her oldest son and his fate. But with Victor facing charges, perhaps Christine will focus on the Newman patriarch and leave Noah alone. There’s a new judge being cast on Y&R – perhaps for Victor’s trial…

Don’t miss any of the Y&R episodes the week of Monday February 29 thru Friday March 4 and check back with CDL every day for daily “The Young and The Restless” spoilers and day-ahead advanced spoilers.