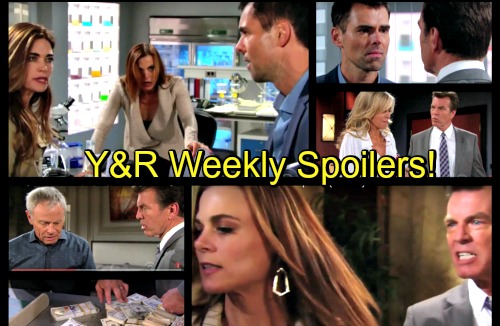 The Young and the Restless (Y&R) spoilers for the week of September 12-16 tease that we’re about to see the moment we’ve all been waiting for. Billy (Jason Thompson) and Phyllis (Gina Tognoni) have been keeping a dangerous secret, but it’s about to be exposed. Jack (Peter Bergman) will learn that Phyllis has been having a torrid affair with his own brother!

Before we get to the explosive revelation, Jack and Phyllis will actually try to work things out. Y&R spoilers indicate that this couple will decide to go to marriage counseling. They’ll hope that they can fix their relationship before they it’s too late.

That means Billy is about to get his heart broken. The Young and the Restless spoilers suggest that Billy will be torn apart. He truly loves Phyllis and wants to be together. Billy will believe his bright future has been ripped away. He just won’t know what to do without that dream.

Naturally, Billy will blame Jill (Jess Walton) for messing up his chances with Phyllis. He’ll go on a drinking binge before confronting his mother. Jill will insist that she’s done all of this for Billy’s own good, but he won’t agree. An emotional Billy will lash out at Jill for ruining his life.

Jill will ultimately realize just how much Billy cares about Phyllis. She’ll offer her son an apology for making him lose his love, but Billy won’t be quick to forgive. Of course, this isn’t the only relationship that will suffer because of the affair.

Victoria (Amelia Heinle) will get a hint and question Billy about sleeping with Phyllis. Next, Ashley (Eileen Davidson) will confront her brother about doing the unthinkable. Meanwhile, Victor (Eric Braeden) will find out that Jack and Phyllis are having marital problems. He could soon be on a mission to discover what’s been buried.

Colin (Tristan Rogers) will be sniffing around this week as well. The Young and the Restless fans know that Colin never passes up a profitable opportunity. Jill will let Colin in the loop, but she’ll order him to stay tight-lipped. Yeah, right. Like that’s going to happen!

Colin will offer Jack some valuable information on Phyllis, but it will come with a high price tag. He’ll want $1 million in exchange for what he’s learned. Jack will turn Colin down initially, but he’ll reconsider after more suspicions emerge. Jack will dump out a bag of cash and demand to hear the secret.

We’ll also see Jack grilling Ashley about whatever she’s not telling him. Phyllis will obviously face plenty of questions, too. Y&R’s weekly promo shows Phyllis walking away from Jack, but he’ll immediately pull her back. Jack will shout that he wants answers. He’ll even ask Billy point-blank if he’s in love with his wife.

The big reveal is finally happening! You can bet the CBS soap will deliver some gripping drama. This cheating scandal will rock the Abbott family to the core. Bonds will be broken and relationships will change forever.

Can Phyllis and Jack ever get past this? Could Billy and Phyllis reunite instead? There are several ways this could go, but we have to get through the affair chaos first. We’ll give you updates as other news comes in. Stay tuned and don’t forget to check CDL often for the latest Young and the Restless spoilers, updates and news.