The Young and the Restless (Y&R) Spoilers: Patty NOT Dr. Anderson’s Killer, Freaks When Dylan Says She’s a Murderer 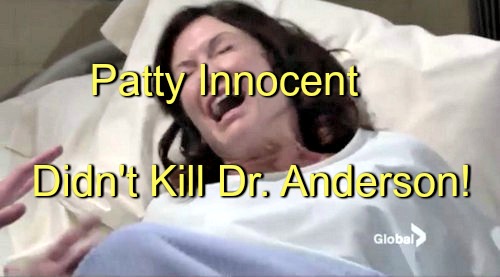 “The Young and the Restless” (Y&R) spoilers for Thursday, February 11, tease that the fallout of Dr. Anderson’s (Elizabeth Bogush) death will continue. Dylan (Steve Burton) will decide to talk to Patty (Stacy Haiduk) in his search for answers.

When Dylan starts to question Patty, she’ll freak out. Patty will shout that she’s not a murderer and she’ll suggest that Dylan is lying. Paul (Doug Davidson) will try to console Patty, but it’s clear that she’s suffered severe emotional distress.

Y&R viewers saw Patty’s flashbacks of the ordeal, but we may not know the whole story. It’s possible that Patty simply hallucinated the experience. It wouldn’t be the first time a patient had delusions at Fairview.

Someone else could’ve committed the crime if Patty was drugged and didn’t realize it. However, it’s also possible that the trauma of the incident has scarred Patty to the point that she suddenly blocked out her gruesome actions. It must’ve been a lot for Patty to bear.

Patty is always teetering on the edge of a mental breakdown. She can go from sweet to psycho and back again almost seamlessly. If Patty’s memory fails her, she may not remember Dr. Anderson’s baby theft. Even if she does, Patty might have difficulty getting anyone to believe her. Crazy Patty certainly has a tough battle ahead of her.

Nevertheless, Dylan will be on the case and he might be able to gather some clues from his conversation with Patty. Meanwhile, Nick (Joshua Morrow) and Victor (Eric Braeden) will hash things out. “The Young and the Restless” preview video shows Nick pushing Victor to accept at least some responsibility in what happened.

Victor will maintain that he’s not to blame. His actions were only meant to protect Nick. Unfortunately, the cover-up led Sandra Allen (aka Dr. Anderson) to seek vengeance and it ultimately caused her downfall. Now Nick is pointing the finger at his father. It sounds like we’re in for an epic confrontation.

Elsewhere, Billy (Jason Thompson) will turn on the charm for Victoria (Ameila Heinle). Billy will pull out all the stops as he tries to set the mood for romance. Victoria will be pleased by Billy’s efforts to woo her.

Billy and Victoria’s relationship is stronger than it has been in a long time. That undoubtedly means a major blow is coming. Once Victoria gets the news that Billy is in on Phyllis’ (Gina Tognoni) scheme, there’s going to be big trouble. Stick with the CBS soap for updates on the turmoil that’s in the works.