BY Heather Hughes on November 22, 2016 | Comments: one comment
Related : Soap Opera, Spoiler, Television, The Young and the Restless 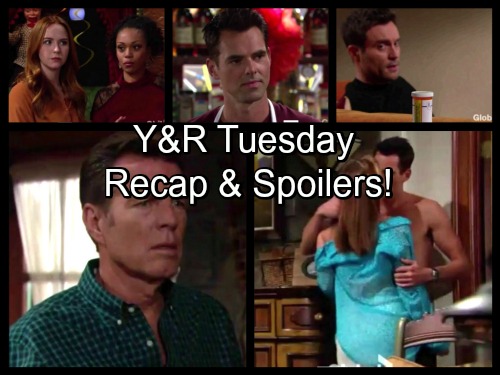 The Young and the Restless (Y&R) spoilers for Tuesday, November 22, tease that Jill (Jess Walton) will force Billy (Jason Thompson) to hand out food and toiletries to the homeless. He’ll notice that Jill has ordered some aprons that feature Brash and Sassy’s name on the front. Jill will suggest that Billy should put one on and serve with Victoria (Amelia Heinle) at Crimson Lights. Please come on over and participate in the LIVE Y&R discussion on our Facebook Page!

Billy will note that Victoria is probably busy with Travis (Michael Roark). He’ll mention Travis’ recent proposal, but Jill won’t think that matters. She’ll believe Victoria might be holding out for Billy since she hasn’t provided an answer.

Meanwhile, Phyllis (Gina Tognoni) will urge Summer (Hunter King) to have fun with the Newmans. She’ll contend that she’ll be fine doing her own thing this Thanksgiving. Abby (Melissa Ordway) will arrive in a cranky mood. She’ll eventually explain that Traci (Beth Maitland) is ill and Ashley (Eileen Davidson) has gone on a business trip.

Since Abby and Jack (Peter Bergman) are going to be alone, Phyllis will encourage Summer to join their gathering. Later, Abby will cook the turkey in the deep fryer. She’ll end up starting a small blaze and filling the house with smoke, but Jack will take care of it with a fire extinguisher.

Summer, Abby and Jack will all enjoy the pies that were salvaged. They’ll commiserate over being single during the holiday season. After Abby and Summer head out, Jack will imagine that Billy and Phyllis are having sex in the cabin. He’ll look distraught as he thinks about their betrayal.

At Crimson Lights, Hilary (Mishael Morgan) will show up griping about Devon’s (Bryton James) new assignment. He’ll insist that they’re going to do a sweet story for Thanksgiving. When Hilary spots Phyllis and Billy exchanging smiles, she’ll tell Mariah (Camryn Grimes) that things are going to get interesting.

Y&R spoilers say Devon will put a stop to Hilary’s efforts. He’ll decide to use Mariah’s footage instead of the scandalous angle Hilary was going for. At GC Buzz headquarters, Hilary will note that Mariah’s stuff is actually pretty good. She’ll think this won’t be a bad scoop after all.

At Cane (Daniel Goddard) and Lily’s (Christel Khalil) place, they’ll enjoy some family time. Neil (Kristoff St. John), Moses (Dax Randall) and the twins will all join them for a meal. Cane will still be in severe pain thanks to his knee surgery, but he’ll try to make the best of it.

After Devon calls and tells them to tune in, they’ll watch a heartfelt piece on GC Buzz. A homeless lady will talk about how she lost everything due to her addiction. There’s good news though. The woman is clean now and wants to put her life back together. An advertisement for the Abbott-Winters Foundation will follow the report.

Hilary will secretly hand her cameraman an envelope containing a note and plenty of cash. He’ll take it to the homeless woman and she’ll open it up. The note will suggest that it’s never too late to rebuild. It seems Hilary has a heart in there somewhere.

Of course, you shouldn’t get used to this softened Hilary. She’ll get right back to snapping at Mariah after the envelope is passed on. Jill will also be on the warpath. The Young and the Restless spoilers say she’ll argue that Phyllis needs to steer clear of Billy. Jill certainly hasn’t given up on Billy and Victoria’s reunion. She’s going to get her wish down the road.

Back with Cane, it looks like some struggles are in his future. He’ll grab a bottle of pills in Tuesday’s episode. The Young and the Restless buzz hints that Cane could be on the verge of a serious addiction. We’ll give you updates as other details emerge. Stick with Y&R and don’t forget to check CDL often for the latest Young and the Restless spoilers, updates and news.