‘The Young and the Restless’ Spoilers: Adam Gets 30 Years in Prison – Chelsea on the Warpath, Attacks Victor with Scalpel 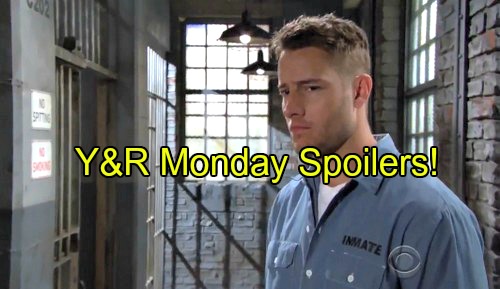 The Young and the Restless (Y&R) spoilers for Monday’s episode, July 18, tease that Adam (Justin Hartley) will realize this is the end of the road. Adam will say his goodbyes to Chelsea (Melissa Claire Egan) and Connor (Gunner and Ryder Gadbois) as he prepares to accept a plea deal. There’s just nothing else he can do.

Meanwhile, Chloe (Elizabeth Hendrickson) will hear the news that court will soon be back in session. She’ll gaze at Delia’s (Sophie Pollono) photo and state that this is a big day for them. Chloe will grab a lighter and consider burning the real pages of Sage’s (Kelly Sullivan) diary. She’ll ultimately back out and stash them in a drawer instead.

Other Young and the Restless spoilers reveal that Dylan (Steve Burton) will be perplexed by the case. He’ll vent to Sharon (Sharon Case) at home. Sharon will offer her support and they’ll share a kiss. Mariah (Camryn Grimes) will walk in on their warm moment.

After Dylan departs, Mariah will suggest that she should move out. She won’t think Sharon needs her around. Mariah is just a constant reminder of the secret. Later, Mariah will call Kevin (Greg Rikaart) and he’ll agree to let her move back in her old room. Needless to say, Natalie (Mara McCaffray) won’t be too happy about it. 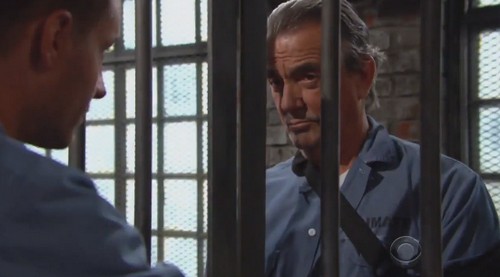 When Mariah comes for the keys at Crimson Lights, Natalie will be sure to kiss Kevin in front of her. It seems Natalie wants Mariah to know that the new living arrangement changes nothing. In fact, Kevin and Natalie will have plans to work on Adam’s case at a hotel. They’ll be spending plenty of time alone.

At the courthouse, Michael (Christian LeBlanc) will tell Adam that he isn’t admitting guilt. His plea just means that the prosecution’s evidence is overwhelming. Chelsea will speak with Dylan and point out that Victor (Eric Braeden) must know something about the journal entries. Dylan will head to the hospital to get to the bottom of it.

In Victor’s room, Y&R spoilers say Dylan will want some answers. He’ll declare that now is the time to come clean if Victor loves his son at all. Dylan will mention that Victor backed out of his deal with Adam, but Vic will play dumb. He’ll claim there’s nothing he can do. Nikki (Melody Thomas Scott) will assure Dylan that Victor cares about his son.

Dylan will return to the courthouse and tell Chelsea that he couldn’t get anything out of Victor. Adam will plead guilty and the judge will hand down a 30-year sentence. Adam will be taken to prison immediately, but Chelsea won’t give up her fight to prove his innocence.

After telling some reporters that she’s going to exonerate Adam, Chelsea will march over to Victor’s hospital room. Chelsea will snatch up a scalpel and shove it in Victor’s face. She’ll insist that Victor is going to tell her where those journal entries are.

Dylan will find Kevin and learn that he’s been hacking the state pen’s security footage. They’ll mull over the situation, but they won’t have anything solid to go on. Kevin and Dylan will hope that they can connect Victor’s accomplice to the locker with the empty envelope. That could be the key to cracking the case.

When Dylan returns home, he’ll inform Sharon that an innocent man is in prison. Dylan just won’t feel right about it. Fortunately, Adam has slowly gained some support. With Chelsea and Dylan in his corner, Adam should be able to get out of this eventually. Stay tuned for updates on what’s in store.