‘The Young and the Restless’ Spoilers: Adam Pushes Chelsea Away Again – Chelsea and Nick Pair Up on Christian Reveal? 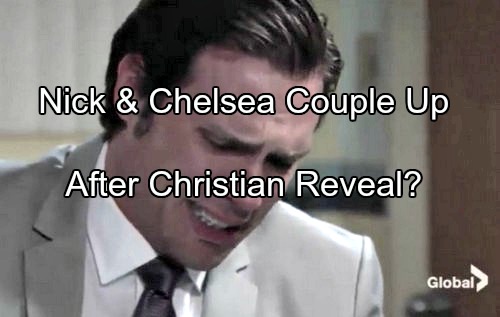 The Young and the Restless (Y&R) spoilers tease that Chelsea (Melissa Claire Egan) will have more concerns about Adam (Justin Hartley). She realizes that Adam is looking at a 30-year prison sentence if they can’t find a way to prove his innocence. Unfortunately, none of their tactics are working at the moment.

Chelsea truly believes Chloe (Elizabeth Hendrickson) has forgiven Adam and is concentrating on her life with Bella (Cali May Kinder). Of course, Y&R viewers know that Chelsea is being duped by Chloe’s magnificent charade. We have to hand it to her. The show Chloe’s putting on is quite convincing.

Since Chelsea seems satisfied that Chloe isn’t out for revenge, she’ll likely shift her focus back to the missing journal entries. If they can find those pages and convince a judge that the others were forged, it would provide compelling evidence of a setup. Adam might be able to gain his freedom.

Chelsea is already pressing Dylan (Steve Burton) to get to the bottom of this, but he’s on his own in the investigation. Paul (Doug Davidson) insists that the case is closed. If Dylan can’t get any solid leads, what else can Chelsea do? Perhaps Nick (Joshua Morrow) will increase his efforts to figure all of this out.

It’s important to note that Adam could be in prison for a long time. In a recent interview with Michael Fairman, Justin Hartley hinted that his new NBC series would be his top priority for a while. Since Hartley is busy filming This Is Us, we’ll definitely see his airtime at The Young and the Restless dwindle.

Y&R spoilers reveal that Chelsea will once again feel like Adam is pushing her away. If Adam revisits the idea of shutting Chelsea out for her own good, she’s going to be incredibly distraught. Will Nick step up to help Chelsea through this? We could see their friendship strengthen in the coming months.

If Adam finally divorces Chelsea and cuts off all visits, she might even let herself fall for Nick. They could bond over their hardships. Nick is undoubtedly still grieving over Sage (Kelly Sullivan) and probably feels somewhat responsible for taking his accusations to the police. Adam wouldn’t be in this mess if Nick hadn’t waved that phony journal around like a mad man.

Chelsea may also feel like she’s failed Adam. She wanted to protect him from his vindictive father, but no one can really beat Victor (Eric Braeden). Even Chloe will learn that down the road. If love blooms for Nick and Chelsea, it would create an interesting situation once the truth about Sully comes out.

The Young and the Restless is obviously saving the Sully reveal for big sweeps episodes in the distant future. Y&R may choose to have Chelsea and Nick as close as possible when it happens. Chelsea would likely stay tight-lipped about Christian’s paternity for Nick’s sake.

Then, Adam could get out of prison and find that Nick had moved in on Chelsea. Boom! He’d have a great reason to drop the bomb on him. Adam could disclose that he’s Christian’s father and Nick would be devastated. That would give us some epic drama.

Regardless, it looks like Chelsea and Adam could end up drifting apart thanks to his lengthy prison sentence. We’ll give you updates as more news comes in. Stick with Y&R and don’t forget to check CDL often for the latest Young and the Restless spoilers, updates and news.