BY Heather Hughes on January 13, 2016 | Comments: one comment
Related : Soap Opera, Spoiler, Television, The Young and the Restless 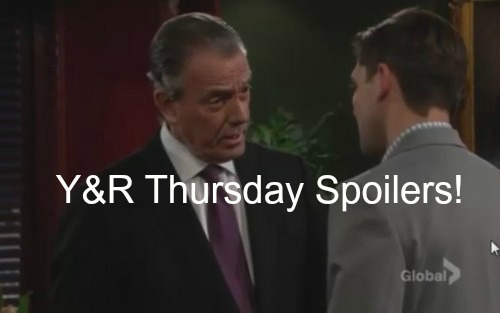 “The Young and the Restless” spoilers for Thursday, January 14, tease that Jack (Peter Bergman) will try to fathom a life without Billy (Jason Thompson). The Abbotts are undoubtedly wondering how they’ll cope with this hole in their family. Jack will see Jill (Jess Walton) and Phyllis (Gina Tognoni) looking somber and he’ll sense that Billy doesn’t have much time left.

However, Jack will soon receive some miraculous news about his brother. Billy’s doctors will be stunned when he continues to fight. The Abbotts will have renewed hope that Billy is going to make it. Victoria (Amelia Heinle) will be overjoyed when she gets updates on Billy’s improving condition.

It turns out Billy will have one more shot to create a happy life with Victoria and their children.

Elsewhere, Mariah (Camryn Grimes) will learn about Kevin’s (Greg Rikaart) business meeting with Victor (Eric Braeden). In Y&R’s preview video, Kevin points out that he went straight from Billy’s beside to Victor’s office. Mariah will realize that Kevin decided to take Victor’s offer.

Kevin felt he needed to close this deal, but that doesn’t mean he’ll feel good about it. Almost everyone that does business with Victor ends up regretting it. Kevin tried to stay strong, but it seems it’s impossible to say no to the great Victor Newman.

Let’s hope Kevin won’t get burned too badly as a result of this agreement.

Meanwhile, Noah (Robert Adamson) will make a big decision. “The Young and the Restless” spoilers reveal that Noah will plan to confess that he’s the one who accidentally backed over Billy. Victor will insist that Noah’s admission won’t change anything and it certainly won’t do anything to alleviate Victoria’s pain.

Noah won’t want to stay quiet while Billy is dying, but things could change once Billy’s condition improves. Perhaps Noah will decide that all’s well that ends well. Unfortunately, Luca could easily spoil that idea.

Now that Luca knows Noah’s secret, he could spill the beans at any time. Stick with the CBS soap to see if Luca will pose a serious threat.

Of course the biggest shocker after Billy’s freak recovery is Adam’s kidnapping. How will this play out – who is behind the evil deed and what are their demands – is Marco involved or is he really dead? Stay tuned to Y&R and count on CDL to bring you all the details on Adam’s abduction first.