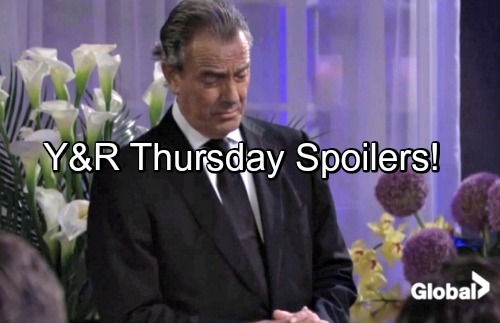 The Young and the Restless (Y&R) spoilers for Thursday, September 8, tease that Victor (Eric Braeden) will gear up for a stunning confession. He’ll claim he’s the one who should be blamed for Adam’s (Justin Hartley) death. Jack (Peter Bergman) will argue that we can’t control those we love. He’ll believe Adam would be willing to forgive Victor for any trouble he caused.

Victor will decide against confessing anything in particular and the memorial will continue. Chelsea (Melissa Claire Egan) will stand up to say a few words. She’ll let Connor (Gunner and Ryder Gadbois) know that they’re going to stay strong and be brave like his daddy.

Once the service wraps up, Nick (Joshua Morrow) will take Chelsea home and she’ll wonder how Adam could leave them like this. Chelsea will gaze at her wedding ring and have a flashback of their vow renewal. Elsewhere, someone wearing black gloves will carefully place Adam’s ring in a drawer.

The plot thickens! If Adam’s ring has been removed from his hand, it appears he’s still alive. The Young and the Restless undoubtedly has some twists in store. Stay tuned for updates on this exciting storyline.

In the meantime, we’re inching closer to the reveal of Phyllis (Gina Tognoni) and Billy’s (Jason Thompson) affair. However, Phyllis will hope to prevent any shocking disclosure. After sex at the cabin, Phyllis will insist that she can share a secret life with Billy. She’ll plan on keeping her public one with Jack intact.

Billy will reject that idea and maintain that he wants Phyllis all to himself. Besides, they wouldn’t be helping Jack by feeding him more lies. Y&R spoilers say Billy will push for a full admission of their love. It’s tough news, but Billy will think it would allow everyone to move on.

Back in Genoa City, Jill (Jess Walton) will discover that her scheme is falling apart. Victoria (Ameila Heinle) will announce that Travis (Michael Roarck) is tagging along on her business trip. She’ll state that it was Billy’s suggestion. Jill will grumble as she tries to call her son. She’ll leave a hateful voicemail urging Billy to get to the airport ASAP.

Ashley (Eileen Davidson) will have a chat with Jack about Phyllis’ behavior. She won’t think it’s right for Phyllis to give Jack such a hard time. Phyllis certainly has no problem showing her support for Billy. Jack will text Phyllis, but he won’t get a reply.

Later, Billy and Phyllis will show up at Top of the Tower. When Jack asks where Phyllis has been, she’ll admit that she was with Billy. Meanwhile, Chloe will confront Victor about his halted confession. Victor will snap that Chloe had better be telling the truth about her innocence or she’ll regret it.

At Crimson Lights, Kevin (Greg Rikaart) will talk to Sharon (Sharon Case), Michael (Christian LeBlanc) and Chloe about the memorial. He’ll wonder why Victor didn’t come clean about anything. Suddenly, Chloe will say she has somewhere to be. After she rushes off, Kevin will gripe about the way Chloe tends to put up walls.

Chloe will visit Delia’s (Sophie Pollono) roadside memorial. She’ll hint that she kept her promise and Adam has paid the price for his actions. Chloe could be in for a rude awakening when Adam eventually shows up alive. Stick with the CBS soap to see all of the shockers ahead.