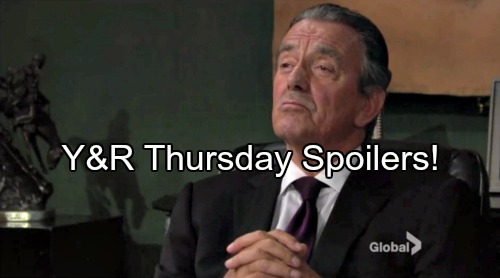 The Young and the Restless (Y&R) spoilers for Thursday, August 18, tease that Jack (Peter Bergman) will confront Victor (Eric Braeden) about roping Phyllis (Gina Tognoni) into a scheme. He’ll make it clear that Victor needs to stay away from his wife. It looks like these old foes will clash once again.

Phyllis was desperate to protect Summer (Hunter King) and that desire drove her to team up with Victor. She would do anything for her daughter, even work with the man she hates most in this world. Jack isn’t exactly fond of Victor either. He supported Victor’s release from prison, but he certainly didn’t expect Phyllis to become her enemy’s partner in crime.

Victor will likely defend his actions with his usual family speech. Nevertheless, Jack won’t approve of this alliance and the trouble it could cause. Meanwhile, Ashley (Eileen Davidson) will warn Phyllis that she’s playing a dangerous game and has everything to lose. Ash will want Phyllis to understand what’s at stake.

Phyllis is focused on Summer right now, but Ashley won’t be sure that’s the best idea. Jack and Phyllis’ marriage is already on shaky ground. Ashley will suggest that Summer is a big girl and can take care of herself. She’s old enough to make her own mistakes and deal with the consequences. Ashley will urge Phyllis to concentrate on repairing her marriage before it’s too late. 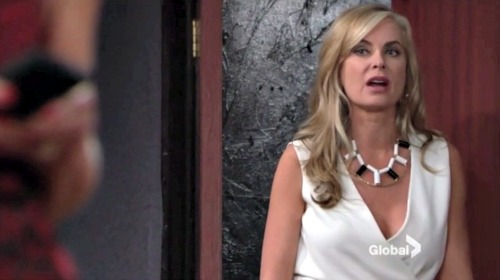 Of course, Phyllis and Billy’s (Jason Thompson) affair will eventually overshadow the marriage sabotage. A couple of lies about a plot are nothing compared to the news that Phyllis slept with Jack’s brother. Stick with Y&R to see the stunning revelation.

Other Young and the Restless spoilers say Dylan (Steve Burton) and Paul (Doug Davidson) will try to wrap their heads around the new evidence. They’ll be surprised by all of the clues that keep popping up. Will Dylan and Paul realize that it seems a little too convenient?

Paul hasn’t exactly been the brightest bulb in the box lately, so it’s anyone’s guess how he’ll react. The apple doesn’t fall far from the tree, but Dylan is at least trying to put everything together. He feels confident that Adam (Justin Hartley) is innocent, but he may not believe Bethany (Chrishell Stause) is indeed to blame.

Victor usually comes up with decent plans, but they’re not always foolproof. He may hit a few snags in his quest to free Adam. However, Dylan will have to give Chelsea (Melissa Claire Egan) updates on the situation. Chelsea just wants Adam to come home, but she probably shouldn’t count on it happening immediately. The police still have some details to sort out.

Elsewhere, Cane (Daniel Goddard) and Billy will reach an understanding. These two have been at odds over Brash and Sassy, but they’ll try to put the conflict behind them. Let’s hope this truce will last. Billy will have much bigger problems soon. Stay tuned to the CBS soap to see how things play out for Billy.