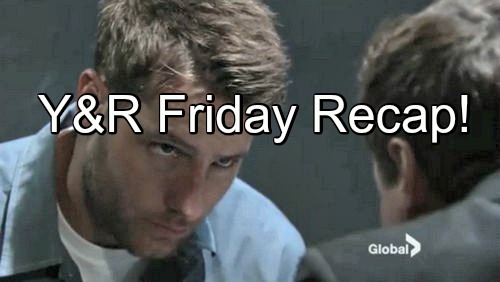 The Young and the Restless (Y&R) spoilers for Friday’s episode, August 19, tease that Adam (Justin Hartley) will realize he’s made a huge mistake. In his cell, two guards will emerge to pull Adam off the other guard he’s strangling. They’ll use a stun gun on Adam and send him to the infirmary.

After Michael (Christian LeBlanc) shows up, he’ll encourage Chelsea (Melissa Claire Egan) to go home while he gets to the bottom of this. Michael will visit a confused Adam and explain the attack. He’ll add that evidence has surfaced and it could get Adam off the hook.

The warden will warn that Adam shouldn’t expect to rejoin society anytime soon. The new assault charges could leave Adam in prison for up to 10 years. Adam will be overwhelmed by the news that he just blew his shot at freedom.

Meanwhile, Chelsea will get comfort from Chloe (Elizabeth Hendrickson). She’ll be grateful for their friendship. Later, Dylan (Steve Burton) and Michael will arrive with updates. Chelsea will learn that Adam is looking at more prison time thanks to his violent actions.

Other Young and the Restless spoilers say Nick (Joshua Morrow) will find out about the new proof in Adam’s case. He’ll examine the journal entries and ponder Victor’s (Eric Braeden) involvement. Dylan and Paul (Doug Davidson) will state that Victor denies framing Adam. He admitted to hiring Bethany (Chrishell Stause), but he claims it was only about seducing Billy (Jason Thompson).

Nick will assume that Victor is keeping a few secrets. He’ll confront his father about setting up Adam. Victor will maintain that he never wanted Adam behind bars. He’ll insist that he didn’t forge the diary. Nick will believe Victor knows more that he’s letting on. He’ll argue that Victor had a motive for taking Adam down.

Y&R spoilers indicate that Sharon (Sharon Case) will cause trouble for Mariah (Camryn Grimes). At Crimson Lights, Sharon will say she told Kevin (Greg Rikaart) why Mariah kept Chloe’s flowers. A flustered Mariah will try to do some damage control. She’ll hope to cover up her love for Kevin.

Mariah will hint that Kevin should just ignore whatever Sharon divulged. Kevin will wonder what Mariah’s real feelings are. She’ll reply that she doesn’t want to see Kevin get hurt. When Chloe brings Bella (Cali May Kinder) and Connor (Gunner and Ryder Gadbois) in, Mariah will lead the tots off for a moment.

Chloe will open up to Kevin about Adam and his upcoming release. She’ll suggest that she’s accepted the idea of Adam being a free man. Later, Kevin will play with the kids while Chloe watches with Sharon and Mariah. They’ll all note that Kevin works well with children. Chloe will think Bella needs to experience what it’s like to have a happy family.

The Young and the Restless spoilers reveal that Victoria (Amelia Heinle) and Travis’ (Michael Roark) reunion will bring a roller coaster of emotions. They’ll start things off with a fight over Victoria’s reasons for coming. Victoria will state that she’s granting Phyllis’ (Gina Tognoni) request. They need Travis to come back to Genoa City and disprove Luca’s (Miles Gaston Villanueva) oil crisis claims.

Travis will suspect that Victoria was curious about the life she’s missing out on. Victoria will brush off the comment, so Travis will hint that he must’ve hurt her ego. He didn’t rush over as soon as she called. When Travis mentions Victoria getting back together with Billy, she’ll say it was a lie. Victoria will assure Travis that Luca made that up to keep him from returning.

Victoria will eventually decide this argument is pointless. She’ll turn to leave, but Travis will pipe up at he can’t stop dreaming about her. He just can’t get Victoria off his mind. Victoria will confess that she still wants Travis. She’ll believe they need each other.

Travis will take Victoria below deck for some hot kisses and steamy sex. Will they give their relationship another chance? Time will tell, but we do know Travis will indeed return to Genoa City. Stay tuned to Y&R and don’t forget to check CDL often for the latest Young and the Restless spoilers, updates and news.