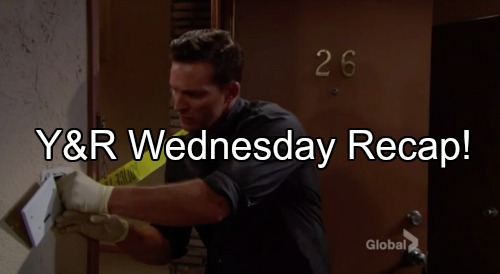 The Young and the Restless (Y&R) spoilers for Wednesday, August 17, tease that Kevin (Greg Rikaart) will be on a mission to clear Chloe’s (Elizabeth Hendrickson) name. He’ll watch surveillance footage of Bethany (Chrishell Stause) at the bus station and decide that they need to keep digging. Since Bethany took a large sum of money, Kevin will think there are more secrets to uncover.

At Newman Enterprises, Bethany will ask Victor (Eric Braeden) what this load of cash is about. Victor will seem cagey at first, but he’ll eventually admit that Adam (Justin Hartley) will go free if Bethany disappears. Bethany will be interested, but only if Victor ups her payoff to $3 million. Victor will accept the terms of the deal and hand over the extra money.

Y&R spoilers say Victor will urge Bethany to take a flight out of town ASAP. When Chloe shows up, she’ll mention the woman she passed outside. Chloe will assume she just saw Victor’s next pawn. Victor will assure Chloe that everything will go according to plan. He’ll believe that both Chloe and Adam will be off the hook.

At Sharon (Sharon Case) and Dylan’s (Steve Burton) house, Mariah (Camryn Grimes) will grill them about their apparent fight. She’ll wonder why Dylan was sleeping on the couch. Sharon will suggest that it was no big deal. She’ll offer Dylan an apology and Mariah will be pleased.

Kevin will stop by to give Dylan updates on the new proof Paul (Doug Davidson) is checking out. Dylan will leave to aid the investigation. Meanwhile, Kevin will see the flowers he sent to Chloe. He’ll wonder why Mariah has them and she’ll confess that she intercepted them before Chloe saw the card.

Kevin will gripe about Mariah interfering in his love life, but she’ll just leave in a huff. Sharon will try to get Kevin to understand how Mariah is feeling. Elsewhere, Jack (Peter Bergman) will blow up at Phyllis (Gina Tognoni) for lying about her plot with Victor. Phyllis will defend her intentions. She’ll insist that she couldn’t let Summer (Hunter King) marry Luca (Miles Gaston Villanueva).

Furthermore, Phyllis will be fed up with Jack’s disapproval. She’ll feel like Jack treats her like a rebellious child. Phyllis will march over to the Brash and Sassy office to continue her current scheme. She’ll find Billy (Jason Thompson) and Victoria (Amelia Heinle) sharing a tender moment as they bond over their kids.

Phyllis will request a private meeting with Victoria. She’ll believe that Travis (Michael Roark) will change his mind about coming back if Victoria pays him a visit. Victoria will be hesitant to see Travis again, but Phyllis won’t give up. After they go back and forth for a while, Victoria will finally agree to help.

Other Young and the Restless spoilers say Jack will chat with Billy about Phyllis’ lies. He’ll hate the fact that Phyllis is so comfortable with all of this deception. Jack will just want some stability in his relationship. That’s one wish that probably won’t come true for Jack.

At the bus station, Dylan will join Paul in dusting for fingerprints. They’ll head to Bethany’s hotel room to gather additional evidence. The untidy state will tip them off to Bethany’s hasty departure. Dylan will quickly locate some wigs that have been stashed there.

Will Dylan buy the story Victor is creating? We’ll have to wait and see, but Chloe will certainly hope so. She has a lot riding on this strategy. The same goes for Adam. Stick with the CBS soap to see if Adam and Chloe will get good news.