‘The Young and the Restless’ Spoilers: Bethany Gets a Big Bribe, Traces It to Victor – The Moustache Evil Scheme Unravels

BY Heather Hughes on August 15, 2016 | Comments: one comment
Related : Soap Opera, Spoiler, Television, The Young and the Restless 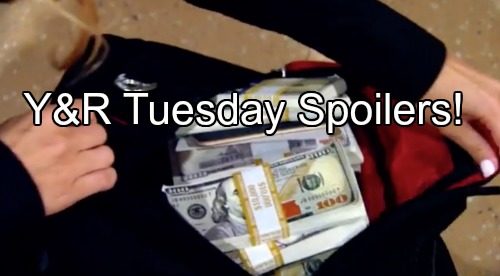 The Young and the Restless (Y&R) spoilers for Tuesday, August 16, tease that Nick (Joshua Morrow) will beg Victoria (Amelia Heinle) to comprehend what’s at stake. They can’t let Summer (Hunter King) marry Luca (Miles Gaston Villanueva). Travis (Michael Roark) could be their only hope of stopping the wedding. He could help Summer understand that she’s about to marry a lying manipulator.

Y&R spoilers say Victoria will finally agree to do what she can. Unfortunately, Travis won’t see things from Victoria’s perspective. Victoria will provide updates on Summer’s impending nuptials and the big mistake she’s about to make. Travis won’t be willing to offer assistance. He’ll turn Victoria down and hang up on her.

Meanwhile, Summer will be convinced that Victor (Eric Braeden) and Phyllis (Gina Tognoni) are plotting against Luca. They’ll maintain that they’re just watching out for her. Victor will bring up his meeting with Luca about the oil spill. Summer will confess that Luca didn’t fill her in on any of it.

When Nick walks in, Summer will suspect that he was part of the sabotage efforts. Summer will stomp off to have a chat with her fiancé. Nick will tell Victor and Phyllis’ that his strategy was unsuccessful. Victoria didn’t have any luck convincing Travis to return.

At home, Summer will want to know why Luca didn’t tell her that he met with Victor. Luca will claim that Victor wanted him to keep his mouth shut. He’ll add that Victor is trying to pin the oil crisis on him. Summer will promise that she wants to share her life with Luca. However, Summer will hope they can get Newmans to come around before the wedding.

At the athletic club, Bethany (Chrishell Stause) will pick up an envelope with a key inside. She’ll take the key to the bus station and open a locker. Bethany will pull out a huge bag of cash as well as a passport. She’ll decide to get to the bottom of where this surprise stash came from.

Other Young and the Restless spoilers reveal that Billy (Jason Thompson) and Jill (Jess Walton) will argue about the mansion. Billy will notice that Jill has restored it to her liking. He’ll note that his changes have been erased. It’s like it’s not really Billy’s home anymore. Jill will insist that Billy is welcome to live elsewhere.

Once Bethany shows up, Billy will ask Jill for some privacy. Jill will exit and Billy will point out that he’s no longer involved with Phyllis. He’ll ask Bethany if she’s trying to get more money. Bethany will be outraged by Billy’s insulting comments and she’ll go on her way.

At the Brash and Sassy office, Billy will hear about Victoria’s dilemma with Travis. She’ll wonder if she should’ve just left town when Travis offered to sail away with her. Victoria will mention that she decided to stick around for Billy’s sake.

Back at the club, Jill will rant to Phyllis about Bethany. Phyllis won’t think Bethany is a real threat. When Bethany approaches, Phyllis will wonder why she’s making a nuisance of herself instead of spending the reward for her silence.

Bethany will dig through the bar receipts from earlier. She’ll find one that tips her off to the person who left the extra cash. In Victor’s office, Bethany will waltz in with the loot. She’ll demand to know why The Moustache wants rid of her. Victor will claim he doesn’t have any idea what Bethany is talking about.

Could Victor be setting up Bethany? He told Chloe (Elizabeth Hendrickson) that he’d frame someone else for their crimes. If she takes the money and runs, Bethany will look guilty. Perhaps Victor could suggest that Luca and Bethany were in cahoots for some reason.

If Victor knows all as usual, he might realize that Bethany could blab about Phyllis and Billy’s affair. Naturally, that news would hurt Jack (Peter Bergman) and might stop the “Villy” reunion that Victor is undoubtedly against. There would definitely be some advantages to getting Bethany mixed up in all of this, especially if Victor makes sure she gets caught. Stick with the CBS soap to see the trouble that’s looming.