‘The Young and the Restless’ Spoilers: Billy Brawls with Cane Over Brash and Sassy – Victoria Caught in Jill’s Web 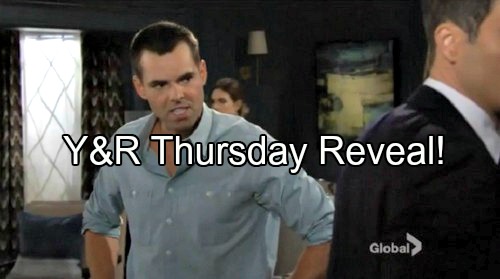 The Young and the Restless (Y&R) spoilers tease that on Thursday’s episode, July 21, Billy (Jason Thompson) will be livid when he realizes Jill (Jess Walton) has caused more trouble. Jill has been criticizing every aspect of Billy’s life lately. She feels Billy is wasting his time as a swinging bachelor. Jill even forced Billy to repaint the mansion because it wasn’t to her liking.

It’s clear that Jill thinks she needs to steer Billy in the right direction. She’s definitely on “Team Villy.” Jill believes Billy is at his best with Victoria (Amelia Heinle) by his side. She’s come up with a scheme to bring Victoria and Billy back together, but she’ll inevitably cause issues in the process.

The Young and the Restless spoilers say Billy will get updates on Jill’s plans for Brash and Sassy. At Jill’s request, Cane (Daniel Goddard) will be in charge. That news won’t sit well with Billy. He’ll lash out at Cane for going along with the idea.

The confrontation will get quite heated. Y&R spoilers indicate that Billy will finally release his rage by punching Cane in the jaw. Cane will respond with a punch of his own. This epic brawl will be stopped by Victoria. She’ll cry out and rush over to break it up. 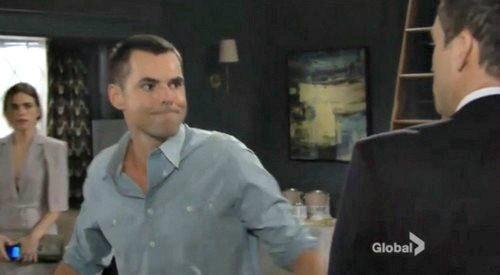 Jill has only implemented phase one of her devious plot. The Young and the Restless spoilers say Victoria will soon receive an irresistible offer. We know that Victor (Eric Braeden) intends on running Newman Enterprises once he’s out of prison. Victoria will need something to occupy her time.

This might be the perfect opportunity for Victoria to make her baby a success again. Brash and Sassy needs her touch. Of course, Jill will want Billy to work alongside Victoria so they can reconnect. However, Y&R buzz suggests that Cane could present a problem. All of that power could go to his head.

Nevertheless, they’re sure to get this worked out sooner or later. Everyone will find his or her place. Once Billy and Victoria begin spending more time with each other, their spark could be reignited. Billy might grow tired of waiting around for Phyllis (Gina Tognoni) to make a decision.

If Billy and Victoria reunite, it might convince Phyllis to let go of any wild dreams. She could just tell Jack (Peter Bergman) that she’s taken the time she needed. Phyllis could state that she’s ready to give their marriage 100 percent. They would all live happily ever after, right? Nope. That just doesn’t happen in Genoa City.

This affair will eventually come back to haunt Phyllis and Billy. The damage will be even more profound if they’ve started to bond with their old partners again. This revelation could throw this foursome back into turmoil.

Jack will obviously be furious. Victoria will undoubtedly think it’s reprehensible, too. She may rip into Billy for devastating his brother. If Victoria and Billy are on the path to romance by then, she would also question if she was a substitute for Phyllis.

Will the big reveal drive Billy and Phyllis back together? Could the pain and shame make them avoid each other instead? We’ll be waiting for the epic moments ahead. Stay tuned to Y&R and don’t forget to check CDL often for the latest Young and the Restless spoilers, updates and news.