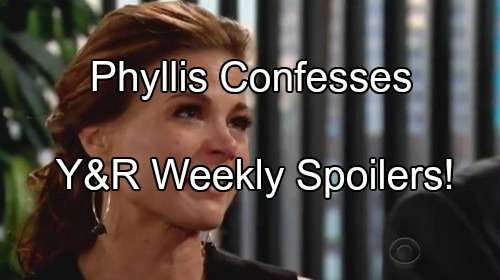 The Young and the Restless (Y&R) spoilers for the new episodes the week of July 11-15 tease that several Genoa City residents will have to make some big decisions. First, we’ll see Adam (Justin Hartley) mull over his current dilemma.

If Adam agrees to work with Victor (Eric Braeden) at Newman Enterprises, he’ll get to keep his freedom.

Of course, Adam fears Victor will lead him to the dark side. Victor is the Darth Vader of the soap world. Adam just won’t know if he can risk going down that dangerous path. Victor will remind Adam that he’s out of options and even Chelsea (Melissa Claire Egan) will agree that this has to be done.

By midweek, The Young and the Restless spoilers say Adam will admit defeat. It certainly sounds like Adam will have no choice but to accept Victor’s offer. He’ll hate the idea of caving in, but what else can he do? Fortunately, Adam could get a lucky break when Victor’s accomplice surfaces.

Natalie (Mara McCaffray) will help Kevin (Greg Rikaart) comb through the security footage. They’ll put their heads together and try to solve the mystery. Chelsea will offer input on who might have a motive to set Adam up. Sooner or later, Chloe (Elizabeth Hendrickson) could become a suspect.

Natalie will realize that the mystery woman went to great lengths to conceal her face in the video. However, it appears Natalie could still catch a glimpse of something useful. Even a fleeting shot could be enough, especially if they already have a hunch.

Y&R’s weekly preview video shows Natalie trying to figure out who Victor’s “little buddy” is. As she studies the footage once more, something will catch Natalie’s eye. BOOM! It’s what Natalie has been looking for.

Adam will be stunned when he realizes Victor brought Chloe into this mess. He’ll think it’s ridiculous that Chloe is continuing her quest for vengeance. The Young and the Restless viewers know that Delia’s (Sophie Pollono) death was simply an accident.

Chloe acts like Adam deliberately mowed down her daughter. That just wasn’t the case.

Bottom line, Chloe is obviously enraged and downright crazy. That’s never a good combination. Michael (Christian LeBlanc) will try to help Adam determine what to do next. Meanwhile, Phyllis (Gina Tognoni) will also have issues to deal with.

She won’t be sure whether she should choose Billy (Jason Thompson) or Jack (Peter Bergman).

Phyllis and Jack will have a tough conversation about their marriage this week. The preview clip shows a weepy Phyllis telling Jack that she’s so sorry and he deserves better. Does this mean Phyllis is picking Billy? Will she confess the truth?

This might even be Phyllis imagining how it would go down. She tends to fantasize about that sort of thing. Regardless, let’s hope this isn’t the actual reveal. It’ll be pretty lackluster if Phyllis just tells Jack herself. We’re hoping some else blows this cheating scandal wide open. Bring it on!

An exciting week is coming up on the CBS soap. We’ll give you updates as more news emerges. Stay tuned to Y&R and don’t forget to check CDL often for the latest Young and the Restless spoilers, updates and news.