The Young and the Restless (Y&R) Spoilers: Chloe Framing Adam for Constance Murder – Returns To GC For Revenge? 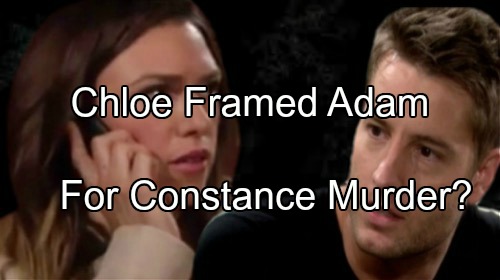 “The Young and the Restless” (Y&R) spoilers tease that an unexpected twist is on the way. Dylan (Steve Burton) and Paul (Doug Davidson) have traced the source of the funds used to bribe the lab tech. They revealed that Victor (Eric Braeden) wasn’t behind the payoff, but we’re still waiting to learn who ponied up the cash to frame Adam (Justin Hartley).

Could Chloe (Elizabeth Hendrickson) be to blame for this setup? Y&R spoilers indicate that Chloe will be headed back to Genoa City soon. She would certainly have a strong motive. The last time Chloe was in town, she tried to kill Adam by running over him with her car.

That tactic didn’t work, which means Chloe might return for another shot at revenge.

If Chloe can’t murder Adam, framing him for one is the next best thing. By sending Adam to prison, Chloe might feel like she’s finally getting justice for Delia (Sophie Pollono). Of course, we know that Delia’s death was simply an accident. However, Chloe is obviously grief-stricken and just plain crazy.

Since Chloe was carted off to a psychiatric hospital to close out her last stint, perhaps she found someone there to help her carry out her plot. Maybe some Dr. Anderson-ish type of character listened to Chloe’s sob story and was nutty enough to assist her.

Even if Paul and Dylan haven’t found Chloe’s connection yet, the name they share could eventually point to her.

“The Young and the Restless” spoilers say Dylan will team up with Kevin (Greg Rikaart) to solve a mystery. If this is referring to a trail that leads to Chloe, Kevin is the perfect person to follow it. He could be surprised by the news of Chloe’s involvement in the setup as well as her next big bombshell.

Chloe evidently has a secret child, but we haven’t been clued in on who the father is yet. Our options seem to be Billy (Jason Thompson) or Kevin, but the latter might be the more interesting choice. A baby would really turn Kevin’s life upside down and add another layer of complication to his current love triangle.

Regardless, there’s definitely some evidence to suggest that Chloe was responsible for framing Adam. If that’s true, how will things turn out for her? This could be a wild ride. Stick with “The Young and the Restless” for updates on the direction this storyline is headed in.

So Y&R fans, what do you think about the idea that Chloe could’ve framed Adam? Would that be an intriguing way to go? Will Kevin get to the bottom of all this? Did Chloe have Kevin’s baby or does the tot belong to Billy?