‘The Young and the Restless’ Spoilers: Chloe Hands Over Diary Pages to Save Bella – Victor To Pin Crime on Another

BY Heather Hughes on August 11, 2016 | Comments: one comment
Related : Soap Opera, Spoiler, Television, The Young and the Restless 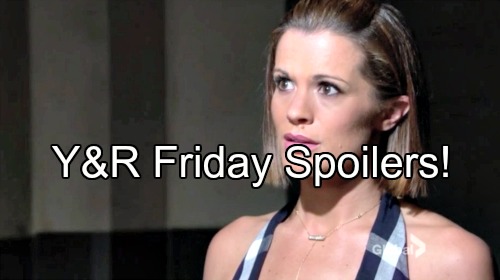 The Young and the Restless (Y&R) spoilers for Friday, August 12, tease that Dylan (Steve Burton) will confront Victor (Eric Braeden) and Chloe (Elizabeth Hendrickson) about their tense meeting in the park. Chloe will state that she was simply chewing Victor out for dropping by Chelsea’s (Melissa Claire Egan) penthouse. Dylan will suspect there’s more to the story.

At Sharon’s (Sharon Case) place, Nikki (Melody Thomas Scott) will give her updates on Dylan’s suspension. Sharon will gripe about Victor, but Nikki will stand by her husband’s innocence. When Dylan shows up, he’ll send them to their corners and promise to back off Adam’s (Justin Hartley) case.

Once Nikki is gone, Dylan will admit that he thinks he may have a way to clear Adam. He doesn’t plan on dropping the investigation. Sharon will worry that Victor could retaliate if Dylan tries to take him down.

In prison, Adam will vow to be there for Connor (Gunner and Ryder Gadbois) when he celebrates his next birthday. When Connor gets scared by a noise, Chelsea will take him out. A short time later, Chelsea will meet with Adam alone. He’ll ask Chelsea not to put their son in that position again. Things will get heated when Chelsea tries to protest.

At home, Chelsea will give Chloe bad news about their prison visit. Chloe will wonder if she made a mistake by returning to Genoa City. She’ll offer to leave town, but Chelsea will try to talk her out of it. Chloe will head out for a while and Chelsea will promise Connor that they’re not giving up on Adam.

At Newman Enterprises, Victor and Chloe will have a discussion about Dylan. When Victor suggests that the burned journal entries were the only solution, Chloe will confess that she still has them. Victor will point out that everything could fall apart unless they form a new plan. He could be sent back to the state pen and Chloe could lose her daughter.

Chloe won’t want Adam to have his freedom, but she’ll agree that Bella (Cali May Kinder) is more important to her. Victor will insist that he can pin the crime on someone else if Chloe hands over the pages. After Chloe retrieves them from behind the office portrait, Victor will hint that he’s impressed by her craftiness.

Y&R spoilers say Victoria (Amelia Heinle) will spend some time bonding with Billy (Jason Thompson) at Brash and Sassy. They’ll share a laugh as they work on a new marketing campaign. Later, Phyllis will drop by to question Victoria about her feelings for Billy. She’ll wonder if a reunion is looming.

Victoria will ask for Phyllis’ opinion and she’ll reply that it might be a good thing. Phyllis will believe that Victoria and Billy can be a strong couple as long as there are no secrets between them. Victoria will wonder if Billy is keeping her out of the loop on something.

Meanwhile, Billy and Jack (Peter Bergman) will have a chat about their mutual love interest. Jack will believe Phyllis is settling down. Even though she’s not pleased by Summer’s (Hunter King) wedding plans, Phyllis told Jack she’d stay out of it. Billy will accuse Jack of sucking the life out of Phyllis like he always does. He never lets Phyllis be herself.

Jack will grow concerned about stifling his wife. He’ll ask Phyllis if there’s any truth to the idea. Phyllis will assure Jack that there’s nothing to fear. They’re on track and it looks like Victoria could be warming up to Billy, too.

The Young and the Restless spoilers reveal that Billy will catch up with Phyllis in the park. He’ll imply that he doesn’t like it when Jack tries to change Phyllis. Billy fell in love with the qualities Jack disapproves of.

Phyllis will insist that Billy needs to get back together with Victoria. She’ll think it’s for the best, but Billy won’t believe Phyllis really wants that. Is Billy right? Could there still be a future for Billy and Phyllis? Stick with the CBS soap to see what’s in store for these two.