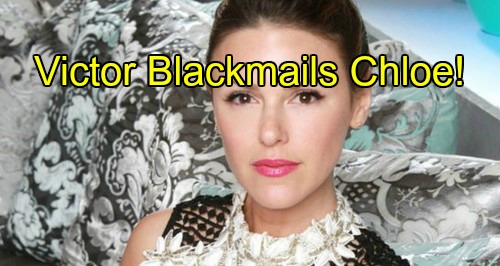 The Young and the Restless (Y&R) spoilers warn fans that on upcoming new episodes we will see that Chloe’s tricky manouver to steal back Sage’s original diary pages, which would have exonerated Adam, will come back to bite her, hard! The Moustache never loses….

Victor Newman (Eric Braeden) has at least two personalities. One projects some semblance of decency, another consistently furthers countless Y&R agendas, regardless of the costs and pain they impose on other residents of Genoa City. As viewers now know, Victor made sure that Bella (Cali May Kinder) was cared for while Chloe (Elizabeth Hendrickson) received much-needed mental health care.

But, then he parlayed her buried vengeance into a frame for murder on ‘The Young and the Restless’. All factors have enabled Chloe to hold temporary leverage over various character’s lives.

Let’s start with Adam (Justin Hartley). The Young and the Restless spoilers say Chloe hates him because she believes that he killed her first-born daughter two October’s ago. So, she played along with Victor’s scheme to plant evidence that made Adam look like he poisoned Constance Bingham (Sally Kellerman). But, then Chloe became aware that Victor advised in open court he didn’t believe Adam was a killer.

Knowing that Adam might escape her warped form of justice, Chloe opted to turn tables on ‘The Moustache’, which she might have been planning to do anyway. She sent Dylan (Steve Burton) on a goose chase through Genoa City, where he found no useful evidence.

Then, Chloe entered Victor’s Genoa City Memorial Hospital room dressed as a nurse so she could inform him who actually had the upper hand. This is the Chloe that viewers of ‘The Young and the Restless’ love, or loathe, depending upon perception.

Now onto Billy (Jason Thompson) and Kevin (Greg Rikaart). Both Y&R men have been referenced because Bella’s name was previously mentioned. She’s the replacement child Chloe thought she created by stealing Billy’s stored genetic material before Hendrickson initially departed ‘The Young and the Restless’ a few years ago.

However, Chloe did have a romantic connection with Kevin before departing. So, it’s easily possible that her ex-husband, Kevin, could be Bella’s dad as well.

Y&R spoilers tell us that the fact that Chloe has another child will be revealed eventually. Obviously, Victor would threaten to divulge that information to whoever might put the most pressure on his blackmail partner.

So, Chloe must somehow force herself to move past the inner rage that’s warped her mind if she intends to hold onto custody of her beloved daughter. A good starting point would be to reconnect with people who truly care about her, including Kevin and her mother, Esther (Kate Linder).

They would help this poor soul gain peace of mind, raise her daughter, regardless of who the father is, and deal with Victor’s potential reprisal.

What do fans of ‘The Young and the Restless’ think? How long will Chloe hold the upper hand in Genoa City? Check CDL regularly for Y&R spoilers and news!