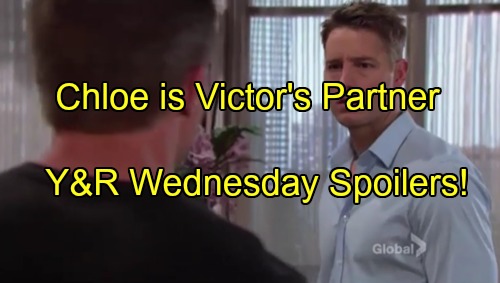 “The Young and the Restless” (Y&R) spoilers for Wednesday’s episode, June 15, tease that Phyllis (Gina Tognoni) will manage to hide while Billy (Jason Thompson) answers the door. Jack (Peter Bergman) will want to chat with Billy about Bethany (Chrishell Stause).

Billy will think his days with Victoria are behind him. He’ll be ready for someone new who fully embraces who he is. The Young and the Restless spoilers say Jack will point out that it sounds like his own relationship with Phyllis.

Billy will confess that it’s exactly what he wants. Jack will offer reassurance and head out.

Phyllis will pop out to discuss the situation with Billy. He’ll imply that he’d rather have Phyllis all to himself, but he can deal with sneaking around if that’s what she wants. Billy just likes being with Phyllis and he’s willing to do this on her terms.

Later, Jack will surprise Phyllis by revealing his plans for a weekend getaway in Barbados. Phyllis will decide to lie her way out of it. She’ll say she has to attend a Passkey conference out of town. Jack will excuse himself to cancel his reservations.

Once Jack is gone, Phyllis will make a phone call to Billy. She’ll indicate that she wants to take a trip with him. They can be alone for a few days. Y&R buzz hints that Phyllis and Billy will just keep digging a bigger hole for themselves.

Jack will be incredibly hurt once he realizes what’s been going on.

Other “Young and the Restless” spoilers say Adam (Justin Hartley) will manage to secure a commitment from Ian Ward (Ray Wise). Adam will return home to let Chelsea (Melissa Claire Egan) and Michael (Christian LeBlanc) know that he took care of it.

He’ll be confident that Ian won’t back out of their agreement.

Meanwhile, Meredith (Alicia Coppola) will take her worries about Victor (Eric Braeden) to the warden. He won’t be too concerned. In fact, the warden will think Victor is doing quite well with the added discipline in solitary confinement.

He’ll mention that he’s heard some things about Victor and Meredith. The warden will make it clear that Victor isn’t worthy of Meredith’s trust.

Young and the Restless spoilers say that Meredith will deliver some stunning news to Paul (Doug Davidson) and Christine (Laralee Bell). She’ll say Victor has been protecting Adam, not framing him.

According to Meredith, Victor has proof that points to Adam being Constance’s (Sally Kellerman) murderer.

Meredith will add that Ian Ward is planning on helping Adam get off the hook. Christine will ask Meredith if she’s willing to make that statement again under oath. Once Meredith departs, Paul and Christine will wonder if Meredith might be telling the truth.

However, Dylan (Steve Burton) will find a clue that could help him prove Adam’s innocence in Thursday’s Y&R episode. Stay tuned to see what Dylan uncovers

When Adam gets updates on Meredith’s testimony, he’ll track her down. Adam will want to know what all of this is about. Chelsea will chime in that Meredith is being played by Victor.

Meredith will suggest that Adam is the one who’s playing Chelsea.

The Young and the Restless spoilers suggest Chelsea will question Adam about the possibility, but he’ll claim that he has no choice but to play dirty. Adam will contend that Chelsea can’t know too much. It could put her in danger.

Adam will assure Chelsea that he’ll let Michael in the loop.

In prison, Victor will reach out to the warden. He’ll complain about Ian’s plot, but the warden won’t be able do anything without evidence. Victor will sit and think alone. He’ll recall meeting with a woman in the visiting area.

In a flashback, Victor says that he wants to punish the people who betrayed him. He realizes that his female partner has a particular interest in making Adam pay the price.

Victor hands over info on how to get the journal forged. He also passes along a contact to alter the autopsy results.

Could Chloe (Elizabeth Hendrickson) be on Victor’s team? She would certainly have a motive for bringing Adam down. Chloe may still want revenge for Delia’s (Sophie Pollono) death. As CDL said weeks ago, Chloe framed Adam for Constance’s murder.

Stick with the CBS soap to see where this storyline is headed.