The Young and the Restless (Y&R) Spoilers: Chloe Returns With Billy’s Baby – Furious Phyllis Gets Jealous 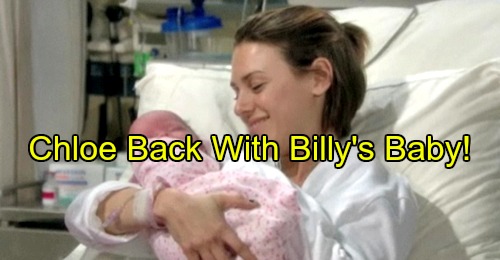 “The Young and the Restless” (Y&R) spoilers reveal that Chloe Mitchell (Elizabeth Hendrickson) will be back in Genoa City soon and it’s not just a drop-by like when she came to town for Delia’s memorial and to run over Adam Newman (Justin Hartley) after his trial. Plus, Chloe’s bringing back her baby!

You’ll recall that Chloe wanted a replacement kid after losing Delia to the hit and run. To try and make Delia 2.0, she stole some of Billy Abbott’s (Jason Thompson) sperm when he was too drunk to perform. But Chloe also slept with Kevin Fisher (Greg Rikaart) so The Young and the Restless spoilers ask who is her baby daddy?

The truth is, Chloe may not know but may assume (and hope) that Billy is the baby daddy and is coming back for him. In fact, Chloe may have heard about Billy and Victoria Newman’s (Amelia Heinle) divorce and thinks she, Billy and this new kid could be some sort of twisted family.

According to a mention that Chloe made back then, she also slept with her therapist, but that could be a lie. But if it’s true, the dad could be the therapist – or Kevin or Billy. Billy has plenty of kids, so it would be great if Chloe’s baby was Kevin’s instead.

However, considering Billy and Phyllis Newman’s (Gina Tognoni) affair which will heat up soon according to this week’s The Young and and the Restless spoilers – still behind Jack Abbott’s (Peter Bergman) back – Chloe showing up with a baby and wanting to play house with Billy is perfect.

Phyllis would be furious and since her affair with Billy should still be a secret at that point, she won’t be able to overtly do anything about it. Phyllis can barely stand Bethany Bryant (Chrishell Stause) being around Billy – and Phyllis is the one who hired her as a beard.

But when Chloe shows up in Genoa City looking to renew her acquaintance with Billy and with a kid at her side, Phyllis might snap. This could be the trigger that finally gets Phyllis to come clean to Jack and make a break so she can have Billy to herself.

One big question in all this is – is Chloe’s baby really Billy’s kid? Or is crazy Chloe deluding herself because she wants Delia back in spirit? Will this all come down to a DNA test? Doesn’t every pregnancy in Genoa City seem to require proof of this sort?

Share your comments below on who you hope is the father of Chloe’s baby girl – Billy, Kevin or the mystery therapist (unless) that was a fib? Come back to CDL often for more “The Young and the Restless” spoilers and news.